An ancient king has a bothersome health condition that prevents him from leading a normal life. He orders his men to find a beautiful dancer who he feels is the only person who can save him from his malady. Cut to another scene where a saintly mendicant ( Nivin Mauly) is in court for stealing a statue. How are these two stories from different time zones, linked together? 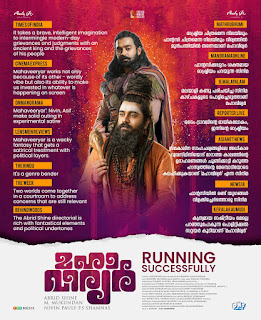 The mainstay of the film are the performances of the talented star cast of Nivin Pauly, Siddique, Asif Ali, Shanvi Srivastav, Lal and others who together keep you engaged and rivetted to the screen.

Elements of satire and dark humor are sprinkled in the early parts but a bit of a lag sets in during the courtroom scenes. 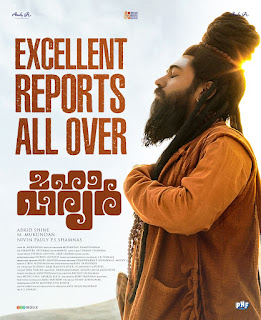 The time travel storyline is neatly stitched together by Chandru Selvaraj's camerawork.

Mahaveeryar  comes across as an attempt to touch upon a socially relevant theme,  laced with satire and dark humor, narrated using  unusual elements  of fantasy and  time travel culminating in a courtroom drama, held together by good performances,Ishaan Chabran's  good music and Chandran Selvaraj's  well framed visuals.