In the story, Santhanam plays a nomadic character ( Google), hailing from a,faraway land, who settles in Chennai. He  keeps tabs on a lot of things and knows a lot ( like Google) especially observing people and their problems and even trying to help when possible. 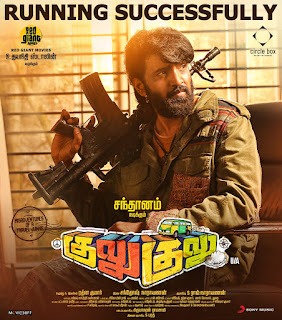 There are 2 sub- plots in the story.  In one,  a young lady wants to pay her respects to her deceased father, which is harshly opposed by her step brothers, who set out to have her kidnapped. In the other, there are a group of friends who kidnap one amongst them to find out how much his father loves him.  The lives of all these characters collide with Google and what happens next is what the story is about.

The characterisation of Santhanam as a soft-spoken, gentle and silent type is a pleasant surprise from his, previous outings as a garrulous man and works well in the film. Other actors, like Pradeep Rawat and George Maryam also stand out for their performances.

However, too many characters, do take time getting used to.

The film has action, romance and comedy albeit of the dark humor variety. Those coming expecting the usual fare from Santhanam, would be in for a surprise and the film is certainly a very different cup of tea for the actor.  Watch out for a subtle message as well.