The Atharvaa-Tanya Ravichandran starrer Trigger hit the screens today.  The film is directed by Sam Anton and produced by Prateek Chakravarty and Shruti Nallappa.

Atharvaa plays a cop, who is the son of an ex cop ( Arun Pandian) who has got Alzheimers. Due to a series of events,  Atharvaa lands up in another, secret division, probing the internal affairs of the force, trying to weed out the corrupt cops, with full access to their phones and other infrastructure, thanks to his boss ( Azhagan Perumal). Atharvaa works  as a team  with other agents (Muniskanth, Chinni Jayanth and others).

Tanya takes care of an orphanage and during a visit there with his family, events take a turn and Atharvaa  slowly uncovers a link to the mysterious reason why his father lost his job as a cop and thus unravels a sinister plot of child traficking. Does he succeed in catching and  punishing the perpetrators ? 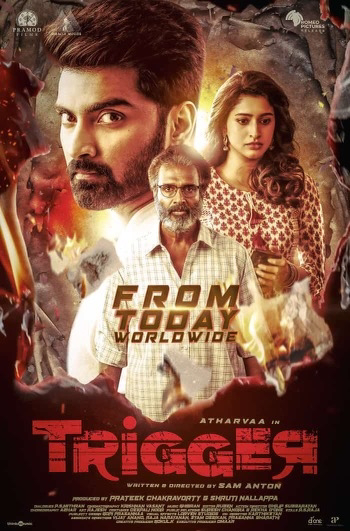 The film is an action investigative drama and Atharvaa excels in the action scenes which are aplenty.  The emotional family scenes with his parents also leave a mark.  The subtle romance with Tanya is treated with a  fine balance, without going off track from the story.

The director has attempted to bring in a different kind of story angle, with a trafficking scam involving corrupt adopting parents and a system which does not bother to investigate in detail, thus giving criminals a free hand.

There are gunfights aplenty as the title would indicate but  strangely that the hero dodges a myriad bullet from the many villains  firing guns around him.  A scene where a little girl is  kidnapped seems a tad ineffectively staged, with the parents-to-be making no effort to go near the child dancing amongst strangers, making it easy for the kidnapping. Scenes where the hero and his team are working sometimes border on the frivolous, taking away from the seriousness and suspense of a thriller.

However, the chase scenes, the investigations and the action scenes are well mounted,  with the bgm adding a gravitas. The subdued hues in the film in keeping with the theme,  and sound camerawork are a big plus. Overall, the father-son relationship, the hi-tech surveillance, a different internal affairs investigative angle and gripping stunts and chases, no long drawn out romance and comedy tracks,  and racy screenplay, make for an action packed commercial entertainer.