The announcement of the acting debut of cricketer Irfan Pathan in Chiyaan Vikram 58, created quite a buzz.

Now, Irfan has revealed on Twitter that he has completed the first schedule of the film directed by Ajay Gnanamuthu and seems quite pleased with the way things have gone off. 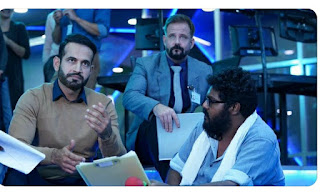 The tweet, being in Tamil has created a further buzz on social media.  Irfan has thanked the Tamil people for helping him take the first step into the world of acting. He added that he was waiting eagerly to return and meet everyone now that the first schedule had gone off well. ' Im waiting'  he added, using Vijay's film famed dialogue, creating a stronger connect with the Tamil audiences.
Here is the text of his tweet in Tamil, "வணக்கம் மக்களே.. நடிப்புலகில் முதல் படி எடுத்து வைக்கும் எனக்கு மிகவும் உதவியாய் இருந்த தமிழ் மக்களுக்கு நன்றி.. 🙏🙏 முதல் schedule நல்லபடியா முடிஞ்சாச்சு.. மீண்டும் எல்லாரையும் சந்திக்க "I'm waiting" 🙏😁 #ChiyaanVikram58"

He also tweeted in English, 'Greetings (Vanakkam) All.. Thanks to all Tamilians for helping my first step in acting.. First schedule completed successfully.. I'm waiting to see everyone again..'