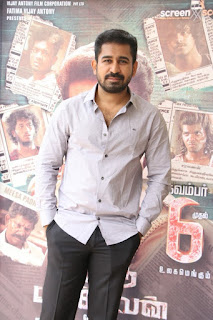 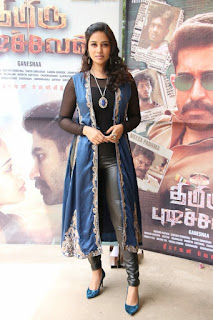 . The film is produced by Fathima Vijay Antony for Vijay Antony Film Corporation, which is directed by filmmaker Ganeshaa. Screen Scene Media Entertainment is releasing this film across Tamil Nadu, which is hitting screens on festive occasion of Deepavali. Here are some of the interesting excepts from the film’s press meet.

Actor Vijay Antony said, “Working in a film like Thimiru Pudichavan is something really phenomenal to me. I’m not just saying this for namesake, but it has been a wonderful team work. Filmmaker Ganeshaa has exerted an intrinsically amazing work with his complete involvement. Yes, I strongly believe that directors are the major protagonists of a film and yes, Ganeshaa is the one to be acclaimed and accredited for his hard work. Moreover, he had to take up additional responsibility on his shoulders as couple of my previous films didn’t perform well in box office. We are now happy that the film has come out well and will surely cater the tastes of family audiences.”

Actress Nivetha Pethuraj said, “Although, I prefer taking up such roles that are Tomboyish and experimental, this one seemed literally challenging when director Ganeshaa narrated me the script. Well, the stuffs like me riding a bullet, riding tricycle and performing some stunts were completely out of my imaginations. But then, I got myself trained and prepared as I felt this role would be something unconventional when compared to my recent ones. Significantly, when I viewed the output during the dubbing process, it indeed has given me a state of contentment.”

Filmmaker Ganeshaa on his part opined, “There is something really awe-inspiring about Vijay Antony sir. Soon after finalizing the script, I was persistently asking him to give me famous actors of greater prominence, who will add more commercial value to the film. But he was so much confident of bringing in new and upcoming actors, who are curiously awaiting to unleash their potentials. But when we see the film’s final output, it has given a  new insight about Vijay Antony sir. Apart from this, he endowed me with everything that I asked without any negligence. This is the first ever time, his movie had a ritual pooja and it was all due to my request. Yet another unforgettably thing that makes me owe him a lot is the fact that a leading producer said that the film’s script is good, but we can go with another director. But Vijay Antony sir was so much stubborn preferring me and said, “Only the people who have lost will have more will power to bounce back and win.”  Such are the greatest things I experienced here and am thankful to Fathima madam for being a great means of help from the time of film’s inception.”

Amma Creations T Siva expressed his complete acclaim over the film saying, “All that I can say is that the film has complete eligibility to make its release for Diwali. It owns such a package that the audience will give complete applause at least for 25 scenes. Every character in the film has found its importance and will be retained in the minds of audiences even after the show. As a member of Tamil film fraternity, I am happy to see that Tamil cinema has been getting good movies consistently released over the past 3 months and this one would completely join the same league.”

Actor Kathir who is playing the comedy role in the film said, “Everyone would appreciate my TV shows, but Vijay Antony sir gave me an opportunity to act in the film. It didn’t just end there, but he came forward and appreciated my performance after seeing it in dubbing. So much down to earth and his good heart happens to be his major element.”

Sindhuja acclaimed Vijay Antony and Director Ganeshaa for giving an opportunity for a transgender to play a full fledged role. “I owe a lot to both of them for being so much generous in giving a scope to our character. I play the role of a first transgender sub-inspector and am sure this isn’t just a life changing experience for me, but to many transgender artistes, who are looking for their talents to be explored.”

Actress Aathira on her part added, “All that I can say is that Vijay Antony sir has to take care of his health as he happens to get involved in lots of departments. There are lots of artistes and technicians aspiring to have a breakthrough with his movies. In fact, he has been the one, who unceasingly gives opportunities for the talented ones. Vijay Antony sir is so much down to earth and his humbleness finds no ends.”

Actor Sampath Ram said, “Vijay Antony sir has been giving great opportunities to every actor. In fact, the ones who had been standing behind the main actors have been upgraded to the substantial roles here in the movie. I myself have been surprised with the performance and I have to thank the entire team for being a great support to me.”

Lyricist Arun Bharathi said, “Everyone has been trying to give their definitions of the title “Thimiru Pudichavan” but I have given my own delineations in the song itself. There has been a good freedom for me working with Vijay Antony sir.”

Art director Shakthi Venkatraj said, “This is the fourth time, I am working with Vijay Antony sir and it’s been a great experience over the years.” Having said these, the art director narrated a short story about the concept of “Thimiru Pudichavan” and justified the title’s significance with the movie.
Vijay Antony