The story revolves around the life of a journalist Yamuna (Nayanthara) who runs off to visit her blind grandmother in Pollachi, in order to avoid a marriage proposal that her parents want her to accept. There, a series of mishaps involving the supernatural, begin to occur ending with the death of her grandmother. 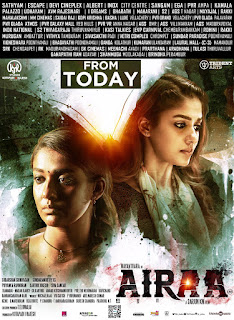 A parallel track goes on, where a man Amudhan (  Kalaiyarasan) finds several people falling off from the terrace in various incidents. His worst suspicions come true when he discovers that everything is related to his former , deceased childhood lover and fiancee Bhavani ( Nayanthara). She is wreaking vengeance on all those who caused her death, ( directly and indirectly) and her next target in Yamuna.

Does Yamuna manage to save herself? What is her reaction when she learns about the tragic life of Bhavani, who was shunned by her family for being dark- skinned and wrongly accused of bringing  ill-luck?  How does the situation affect her fiance Amudhan?

While the  mainstay of the film is the butterfly efffect, where one small incident leads to a cascading effect on others, the way the situations unfold and are filmed,  leave you with a sense of repetition. The horror portions seem to follow a template with not much impact. The various reasons given by Bhavani for her vengeance, seem a  tad contrived. Kalaiyarasan has given a fine performance and his character is fleshed out well ( but his looks are shown to be a bit too mature).
Maathevan and Gabriella who play them as teenagers have succeeded in bringing depth to the backstory with thier performances.

Yogi Babu does his bit in a brief appearance and adds cheer to the proceedings as usual but the magic Nayan and he had in earlier outings seems missing somehow. Jayaprakash and Meera Krishnan play the modern day parents well ( but the reasons for their  rift with the grandmom though mentioned are never really shown).

However, the pillar of the film is Nayanthara and the way she holds your attention all through is what works in the film's favour.  Especially her performance as Bhavani shows a diffferent dimension of the actor. She seems to gone under the skin of the character, with the minutest expressions and body language played out wonderfully. The portions of Bhavani shot in black and white are a nice touch. The lady superstar has with efforless ease, brought to life the dual characters in a superlative performance. The pain of  Bhavani, a victim of circumstance, wrongful social stigmas and exploitation, is well brought out by Nayan ( though the character is shown to be a tad too timid, trusting and innocent despite having been at the recieving end of so much of injustice  in life).
The camerawork adds to the visual richness, (especially the aeriel shots of the rural scenes). Good production values bring out well both the urban and rural portions of the film. There is a twist near the end,  to watch out  for.

A film in which she holds her own and  watchable for brand Nayan.