Taapsee back in Tamil in a home invasion thriller

- June 06, 2019
By Rinku Gupta
After gaining pan -Indian recognition with films like Baby, Pink, Mulk, Manmarziyan and Badla, the multi-tasking Aadukalam heroine, (and now also a Badminton team owner), Taapsee Pannu, is all set to make a splash in a tri- lingual produced by Ynot Studios and directed by Maya fame Ashwin Saravana. 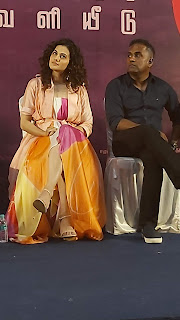 Game Over is a heroine-centric film which will be Taapsee Pannu's next Tamil release produced by YNot Studios Sashikant and Reliance Entertainment, which has been shot in Tamil and Telugu and dubbed in Hindi, keeping in mind Taapsee's large fan following in Bollywood. 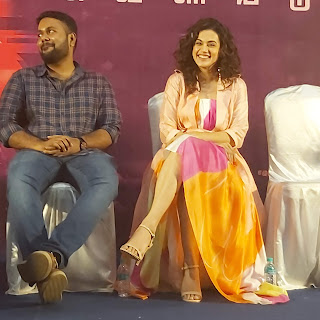 Promotions have been going on full swing in Mumbai. At the press meet in Chennai today, producer Sashikant revealed," We had focus group screenings organized and everyone said the film had something new. We had a great working relationship with Ashwin Saravanan. While casting we wanted someone looking vulnerable but strong within. Taapsee was the perfect choice. We sent her an email and two days later we met her in Mumbai and she said yes. She was absolutely professional.
Its shot as a straight film in Tamil and Telugu and dubbed in Hindi." 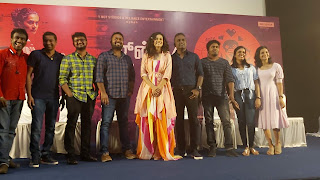 Editing is done by Richard Kavin, his second with Sashikanth post Vikram Vedha. Said Kavin,' 'This is an experimental genre and will be a reference point for future movies.'

Ram Ethan Yohan the music director said ,' This is the best kind of producer for this film as he placed full trust in his technical team. I read about the lead Swapna character in the script but I had to add to the music after Taapsee added her vulnerablity and layers to the character. This is the toughest film I have scored for.' 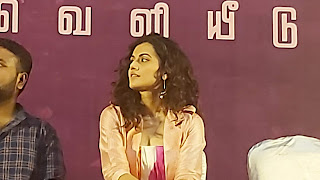 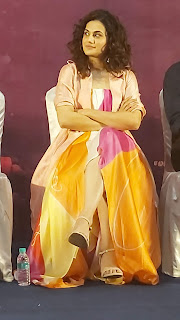 Vasanth has wielded the camera. Director Ashwin Saravanan said before making this film, it had been the most difficult time in these four years after his debut film, the Nayanthara starrer Maya. 'Ynot Studios was very helpful in taking this film to the level it has come upto. They work with a lot of patience and develop the concept in a collaborative manner and take time to choose the right cast and assemble the project. They pulled me out of the darkest phase of my life.
We never expected it would reach a 3 language release like this. The producers are responsible for the international standards the film has been made in.' Ashwin is hopeful his film Iravaa Kaalam would release soon. Praising his  heroine he added, ' I had approached Taapsee to act in my second script Irava Kaalam of mine prior to this. But she us very clear cut and straight forward and felt she would not do justice to that role. But she added that she liked my writing and if I had anything else in mind for her later , she would be happy to hear it. I liked that about her. Not many people would say that. After I wrote this script  we approached her, and she said yes.'

Speaking on the occasion Taapsee said," It takes real courage to back a film like this and I'm grategul to  producer Sashikanth for doing this film. People ask me if there any heroes in Game Over. I think all the technicians and all the assistants in all departments are the heroes of this film. I am just the face presenting this product.   Despite my saying no to Ashwin's earlier offer of a film, he accepted it gracefully and came back to me when he wrote this script. Im really grateful for this role. I would have grabbed it in any language, even if it was in German or French , learnt the language  and done the film!' ( click here for Taapsee's full speech)

The film is touted to be a home invasion thriller, is a crisp 100 minutes in duration and has no romance, comedy and other distractions.
It releases on June 14th.