- August 22, 2019
By Rinku Gupta
Bakrid is the second film ( after Sigai) of director Jagadeesan Subu and is produced by M10 Productions, starring Vikranth and Vasundhara in the lead. Red Giant Movies is releasing the film. 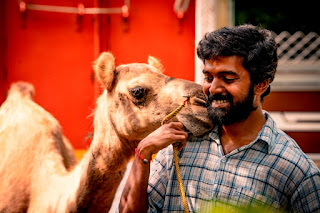 This is a thoroughly unusual story for Tamil cinema.  A simple farmer Rathinam ( Vikranth) is struggling to get a loan to pursue farming (despite the setback of a feud with his elder brother who perfers to partition and sell his lands). One day Rathinam happens to see a young camel brought by mistake for the Bakrid feast along with its mother, at the home of a rich man whom he visits for a loan with his friend. Seeing the predicament, Rathinam decides to bring home the baby camel and look after it along with his cattle, just like a family member. His wife ( Vadundhara) and little daughter( Shruthika) too share his love for the animal who becomes the cynosure of all eyes in the village.
But as the camel named Sara grows, one day it falls terribly ill. The local vet ( MS Bhaskaran in a brilliant cameo) advises Rathinam that he has been feeding it all the wrong foods. Coming from a desert area Sara is not used to the climate nor the local food and has been unable to adjust and therefore has fallen ill. He warns that it may die if it continues living like this. 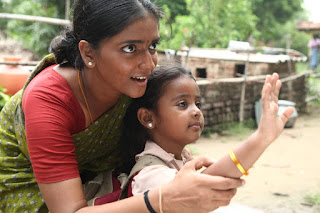 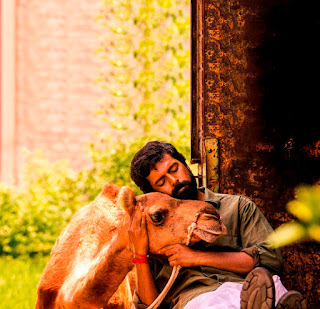 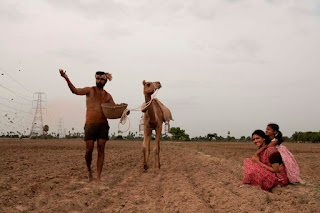 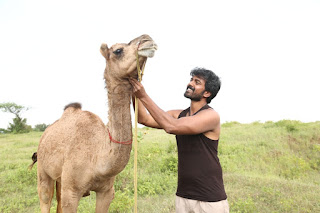 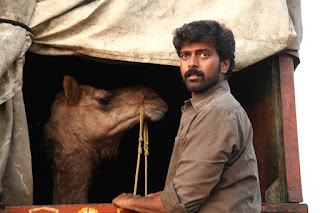 The compassionate Rathinam is pained to hear this and see Sara suffer and so he decides to take the camel back to the desert in Rajasthan ,where it comes from. His love for the camel's well-being overrides his sorrow of parting with it.

This is easier said than done. He can't afford the hefty sum lorry drivers ask for the journey and neither does he know how far Rajasthan is. The innocent Rathinam doesn't even know that the lorry driver he finally finds and trusts, is actually waiting to sell the camel for a hefty profit instead of returning it to the desert.
At first Rathinam intends to travel just a few kilometres and then leave (the reluctant to part with him) Sara in the truck, trusting that he will be transported safely to his desert home. But circumstances change his plans.

As a result, he ends up travelling 2500 Kms by road, transporting a camel through the length of the country, with hardly any money and no knowledge of the local languages, all factors which pose unimaginable risks for him. To his utter dismay, Rathinam lands in the police net, has to deal with thieves and even loses Sara at one stage. Does the hearbroken Rathinam overcome his problems and find his beloved lost camel? Does he succeed in taking Sara ' home'? 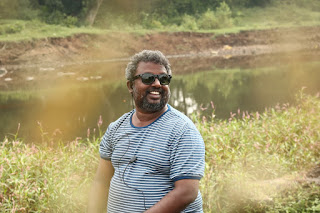 
The director deserves kudos for the way he has handled his unusual script. Not once does he veer away from the story, giving in to 'commercial considerations', which is a huge plus for the film, as it keeps the film and characters real and relatable till the end. The superb choice of actors right down to the little child is another point in the film's favour. The film travels through various states, and Jagadeesan has retained the language spoken there, using Tamil sub -titles. This makes us experience first hand the confusion and helplessness of Rathinam, as he too cannot understand what's happening around him. Again, this adds to the realistic quality of the film. The film gently brings your attention to many issues ( like the importance of farming, the value of friendship, familial bonds and humanity) but never in a preachy manner.
The screenplay moves at a steady pace and there are no lags. The curiosity factor keeps you glued to the screen. D Imman's Bgm is addictive. Director Jagadeesan doubles up as cinematographer, giving us some beautiful visuals, especially in the song when Rathinam is searching for the lost Sara.


Vikranth has landed a unique script and has grabbed the opportunity and given the role his heart and soul, bringing to life perfectly, the innocence and compassion of his character, which is what makes the story so believable. The relationship with his wife and daughter is refreshingly written and a joy to witness on screen. Vasundhara is superb as the supportive wife and loving mother. The way the duo lovingly handle thier child, is a lesson to parents and a delight to watch.
The film is essentially about how strong the man- animal bond can be, especially in rural areas, where cattle and animals are treated like family members. The way Vikranth has handled the scenes with Sara the camel, is exceptional. One has seen many animals as part of the cast, but a camel -based film is perhaps the first of its kind in the country and full marks to Vikranth for making the bonding so real ( he apparently spent time with the camels for 40 days before shooting commenced, and this comfort level, affection and trust between them, reflects in the film).

Bakrid is a delightful film, that will warm your hearts, and fill you with joy and rekindle the innocent  wonder of childhood. Lets hope audiences encourage such directors like Subu who dream to make different films from the usual formulae of action, horror, thriller and rom- coms.

Bakrid,  a film definitely not took be missed, and to be seen with the entire family, grandparents et al !