Lyca Productions' Kaappaan is the third outing of the director KV Anand- actor Suriya combo post Ayan and Maattran. The film has Mohanlal, Sayyeshaa and Arya along with Boman Irani and debutant ( into Kollywood) Chirag Jani apart from Samudrakani , Prem and Poorna. 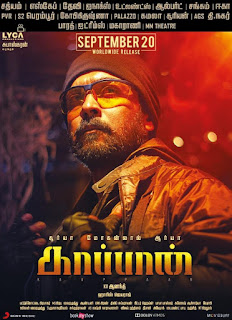 The film revolves around the life of Kathir ( Suriya) who is part of Military Intelligence, when hes not doing organic farming in his native village. His good work as an officer reaches the Prime Minister ( Mohanlal) who makes him part of his SPG  ( Special Protection Guards) team in Delhi. A series of events follow which leads Kathir to investigate several issues, like an assasination, a plotting industrialist  ( Boman Irani) unleashing bio warfare with nefarious designs on farmers for Thorium mining, an old double agent returning on the scene ( Chirag Jani) and protection of the new PM ( Arya). Anjali ( Sayyeshaa as an assistant press secretary) plays Kathir's love interest amidst this mayhem while Samudrakani and Prem are his colleagues in the SPG. What unfolds is a tale of plotting, betrayal and revenge with Kathir at the centre of it all.

The film in typical KV Anand style, has several twists and turns, is fast -paced ( with some racy combat and action scenes that are gripping and not over the top) and is sprinkled with several characters, ( with carefully chosen actors who fit their roles to a T, right down to the last detail of costume and body language) who come and go according to the script. The film keeps moving from TN to Delhi, Kashmir and even London with some good visuals. KV Anand attempts to explore several issues like bio-warfare, self- serving corporates, greedy politicos and even farmer issues, and gives a glimpse of each as we go along.  Some of it may feel repetitive as we have seen these issues addressed in several movies, but its to the credit of the actors who try to keep the viewer invested in the screen proceedings with their performances.
Suriya looks stylish as the dutiful, intelligent SPG Officer and his fans will be happy to see him in this dapper action avatar. Boman Irani with his nuanced expressions and body language is well suited while Mohanlal with his charismatic presence makes for a befitting PM. Sayyeshaa looks good, Chirag Jani as the villain makes a good debut in Kollywood while Arya does whats expected with his usual panache. The twists  manage to keep you engaged.


On the flip side, the songs act as speed breakers. The double -meaning dialogues  are jarring and could certainly have been avoided.  One wonders why a director like KV Anand hasnt written something subsantial for the female lead instead of making her cutesy and mostly just a romantic interest despite giving her a press position.  The story keeps shifting from one issue to another, making it a bit tough to guage what exactly the main plot line is.  It  looks  implausible the way the inexperienced PM's son is suddenly given his post overnight. The credit -titles end song doenst garner much traction though the locales  are visually appealing. Why crucial  scenes at the NIA exploring clues to find the villain,  are shown in a comical light is a puzzle. Bugs are planted all over the PM's office but are strangely undetected. The villain seems to gain entry quite breezily at important events involving  high security. Several issues like these take away from the tension the film tries to build up.

But despite glitches, on the whole, a commercial entertainer  watchable  for  Suriya and Mohanlal in a credible act with the perfect body language for thier roles,  a racy screenplay, some solid action blocks, , a take on bio-warfare, corporate greed and for Anand  giving a  glimpse into the lives of the unexplored  SPG and spreading the film's canvas across the country instead of just  the local fare.
Arya Boman Irani chirag Jani Kaappaan KV Anand Lyca Productions Samudrakani Sayyeshaa Suriya