Directed by Madhumita, KD aka Karuppu Durai is a delighfully narrated story about an old man at  the fag end of his life and a boy at the beginning of his. How this contact blossoms into something beautiful is what the film is about.

KD is a man in his 80s who suddenly wakes up from a coma, in his village,  only to discover that his family is planning to kill him in an act of Thalaikootthal ( mercy killing) as  his vegetative state is a burden on their finances and physically taxing as well.

They plan on doing the traditional mercy killing which results in organ failure and death. Karuppu Durai manages to escape and in his onward journey meets a young orphan boy Kutty ( a brilliant National Award worthy perfomance by Nagavishal) and the two soon become inseparable.
Kutty helps his new friend make a quaint bucket list,  and makes sure KD fulfills each of his wishes,  before an unexpected obstacle hits their joyous journey. Are the duo separated? Does the family of KD catch up with him? What becomes of the duo? 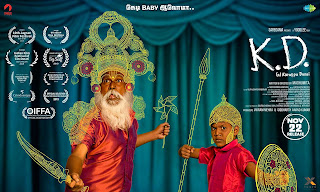 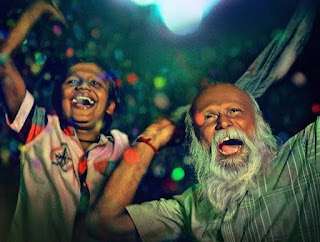 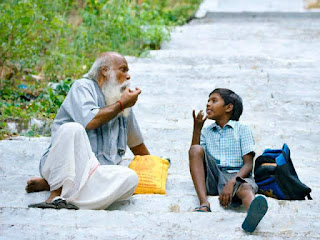 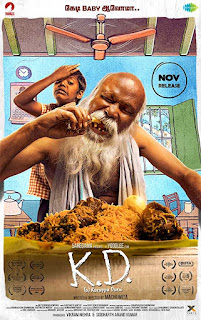 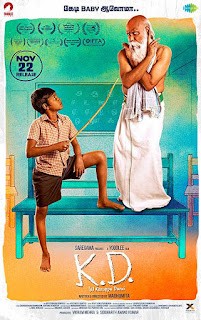 The performance of Muthuswamy with a twinkle in his eyes, soft manner and slow transition from confusion and despair to a man with a zest for life,  is both engaging and inspirational.

Nagavishal is a gem of a find, the very fulcrum of the film, reflecting in equal measure  naivete, enthusiasm, a never-say-die attitude and  at the same time camouflaging well his deep sadness of being an  abandoned child. The dialogues between them make the film a delightful watch,  as does the picturisation of some unusual wishes, and small pleasures that they indulge in which reitereate how life should be lived and not just endured.
Realism is a highlight of the film but at no point does it go stark or negative. Characters are shown for what they are, without harsh judgements on anyone.
Hats off to director Madhumita for bringing such a film to the screen. KD, is an experience to be enjoyed by the entire family with an insightful yet subtly and most entertainingly conveyed message on human relationships. In short , an absolute must -watch, not to be missed movie!