Directed by PadmaKumar, Mamangam is the tale of the ancient valiant warrior clans of Vallavunadu in Kerala, who for generations prove their valour , challenging in the face of death, the powerful Zamorin. 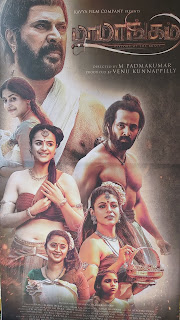 Mammootty, plays one such warrior from the Chandroth House who after a valiant attempt to fight them,  escapes the armies of the Zamorin.
But he does not return to his home and instead resides with a group of women,  in an effiminate avatar as a painter.
Many years later,  he meets two warriors from Chandroth, en route to Mamangam, who are his relatives ( Unni Mukundan and child actor Achyuthan). While training them further based on his own experiences, he also imparts the futility of continuing with the process,  instead of putting the issue to rest. What happens to the young warriors? Do they continue on their quest  ?

The Kalari scenes ( especially of young Achuthan) are a highlight as are the traditional battles by the Valluvanad warriors. The sets are lavish and colorful and make for pleasant viewing.  The bravery and skill of the warriors is well brought out.
But that's not enough to hold our attention all through.  Lengthy dialogues and many details of several characters woven in, make for strained viewing. Iniya and Prachi Tehlan look good in the dance scenes but have not much else to do.  Mammootty as always is a delight to watch,  though his screen time is less than expected.
Unni Mukundan looks the part especially with his physique but his expressions could have been more fierce in the battle scenes. Achuthan steals the show. The rest of the cast,  elaborately dressed, seem to appear in staged performances.

Overall, an intetesting attempt to showcase history,  but which could have done with more interesting screenplay.