Pancharaaksharam is the debut direction of Balaji Vairamuthu, produced by Paradox Productions. The film is  touted to be a supernatural adventure psychological thriller.

The story revolves around 5 youngsters ( Santhosh Prathap, Sana Althaf, Madhu Shalini, Gokul and Ashwin Jerome) who meet at a concert and become thick friends. Each of them had a backstory and each is pursuing his or her own passion in life. During their meeting,  they happen to play a game involving a mysterious  , ancient book.
What they read in each page happens to change their life as things start happening as per what each read on that page. As events unfold, they are forced to take stock and they discover how the power of their thoughts has the potential to change their lives.  How do they get out of the dark spiral they find themselves in?


What works ...
The flavor of the film is sort of New Age, with an urban setting, friendship and adventure with a psycological angle thrown in. Balaji creates this world and takes the viewer through it till the end,  without any apologetic bow to ' commercial ' elements like romance,  comedy tracks and needless song and dance etc, which is refreshing. 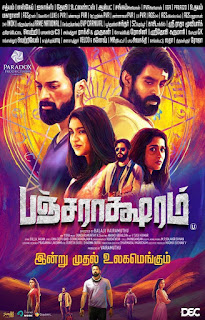 The action scenes are blended in due to the nature of the story and villain Seeman makes for a very credible baddie in the story.  The director seeks to explore the angle that the human thought process can create both good and bad in one's life and tries to give a positive message.
The visuals make for good viewing and characters are well -etched and portrayed. A good message is conveyed about the power of the mind and the tension is nicely built up. The variety of locations are well chosen, adding a feel good factor to the film. The variety of professions of  each character is also interesting.  A contemporary feel is imparted with references to the Dark Web and lifestyle of youngsters. The detailing of costumes and look of each character seems to have been well thought of, adding to their credibilty and making for good visuals.

What doesnt...
Some situations seem contrived in a few places like finding the villain's den fairly easily, and there is a bit more use of English in conversations than usual. The film is touted to have a supernatural angle but its not really clear where exactly its supposed to be.

Verdict...
An engaging watch, with an interesting premise conveyed in a refreshing way,  by a promising debut director's team.
Rating...
3.5 out of 5 ⭐⭐⭐⚡
Pancharaaksharam