Suriya's 2D Entertainment presents Divine Productions' Sillu Karuppatti which has been  released under the newly founded  Sakthi Film Factory Signature Release banner of distributor Sakthivelan.
Directed by Halitha Shameem ( Poovarasum Peepee), the film is an endearing anthology of 4 stories, all with different leads, but with the common theme of friendship, love and relationships.
Each segment has been given a title and each deals with different age groups, from teens to an aged couple.
To say more about each story would take away from the movie watching experience of this incredibly written and mounted project. 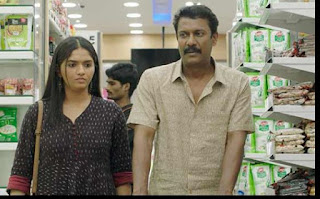 What works...
Each segment showcases different aspects of love, life, relationships and expectations. Every actor has done a superb job, simply immersing the viewer into their world,  making you feel what they are feeling.
Each segment is so delightful, covering various strata of society, with an innocence and honesty running all through and the entire film shows Halitha's deep insight into and observation of life and human relationships. How she connects incidents is another delightful aspect.
Halitha doesnt shy away from discussing so- called ' taboo' issues, in  a deft and simple manner that will surely set you thinking.
The entire film has a very contemporary feel to it.

The overall positive spirit of the movie is quite uplifting.

What doesnt..
The pace is slow at a few places and may need patience.

Verdict:
A not -to-be- missed watch.