After Dhuruvangal Pathinaru, young director Karthick Naren joined the list of  promising directors of Kollywood. Therefore, there was much hype around his next release, Mafia Chapter 1, bankrolled by Lyca Productions. With Arun VIjay and Prasanna in the lead, along with Priya Bhavani Shankar, the film is an action thriller centred around the issue of the drugs mafia.

Aryan (Arun Vijay) is part of the Narcotics Control Board and with his team of Varun and Sathya ( Priya Bhavani Shankar), is keen to wipe out the increasing drug menace. 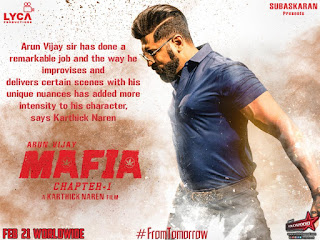 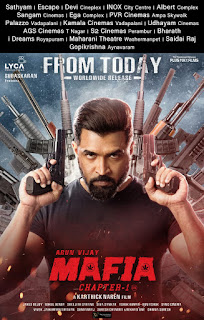 But when a senior cop Selvam gets killed and so does his activist neighbour Mugilan ( Thalaivasal VIjay), just after they got hold of important clues to the identity of the kingpin, Aryan gets hot on the trail.
He soons learns that the kingpin is a tycoon called Diwakar ( Prasanna) and from then on begins a cat and mouse game. Many shoot outs and chases later, he lands up in the villain's den, only to discover a devastating truth. This twist is the basis of the sequel of the film.

Karthick seems to have gotten his star cast right, with the perfectly fit and dapper Arun VIjay looking every bit the star, the effect heightened  by the slo -mo shots.
Prasanna , the consummate actor looks every inch a stylish tycoon with a bad streak.  The face off and the build up towards their meeting is well done.


While Priya does full justice to her role and gets the body language of a stylish narco cop just right,  ( even wielding a gun with aplomb),  one wishes there were more meaningful lines given to her character, instead of a just asking questions to move the screenplay along.

Gokul's camerawork is excellent and Jakes Bejoy m's Bgm and the Vedhan Vandhachoo track are  a plus for the film.

But the excessive use of slow motion shots, gets redundant after a while, scenes being stretched unnecessarily.

The lead characters use of lots of English even in crucial scenes, which seems out of place and added just to give slick touch ( or a Gautham Menon -ish effect over done? ) to the film.