Netizens went into a tizzy yesterday when media reports indicated that Thalapathy Vijay had supposedly applied to register the name of a political party called the All India Thalapathy Vijay Makkal Iyakkam. Rumors flew fast and wide about his stepping into politics with such  move.

However, denying the political entry of the star, his  PR machinery swung into action and soon, a press statement  emerged from Vijay issuing a clarification on the news. 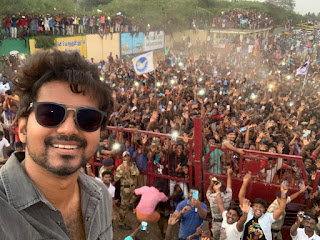 Apparently, his father, director and producer SA Chandrasekar had applied to the Election Commission for registering  a political party in his son's name.

But Vijay distanced himself from it comepletely and urged fans not to be led into joining it just because  his father had started it. He indicated that legal action would be taken if his name or photo were misused.

"Today, I came to know through the media

that my father Mr.S A Chandrasekhar has

express my sincere condolences to my

fans and the public that I have no direct

or indirect connection with the party they

By this, I mean that I will not be constrained

by any actions that may take place in the

future in connection with politics. And I

urge my fans not to join or serve the party

just because my father started it, I regret

that there is no connection between that

party and us and our movement.

I also hope that appropriate action will be

taken against them if they engage in any

activities involving my name or photo or the

In an interview to a news channel,  SA Chandrasekar is reported to have said, "I have applied for registration of political party in the name of ‘All India Thalapathy Vijay Makkal Iyakkam’. It’s my initiative. This is not Vijay’s political party. I can’t comment whether he will enter electoral politics "