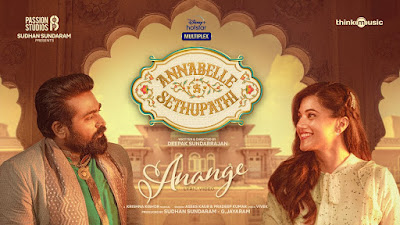 The period fantasy, horror comedy rovolves around a grand palace built by Veera Sethupathi Raja (Vijay Sethupathi) for his British lady love Annabelle (Taapsee). But due to the greed of another ruler ( Jagapathy Babu) who murders them, the palace lands up in ruins, as Veera's cook ( Yogi Babu) poisons the greedy raja and his entire family in revenge.  As a result, all of them end up being ghosts trapped inside the palace.

Cut to modern times, where Rudra (Taapsee) and her family of con artists land up in the haunted palace due to a quirk of fate. Now, the cook recognises her and tries his best to remind her that she is Annabelle and can somehow free them all and take revenge.  Does that revenge come about?

The film is largely fantastical and the ghosts dont actually scare the viewer. Their antics are meant to make you laugh. Kids are more likely to enjoy the humor. With no scenes of gory violence, family audiences are likely to warm up to it.

The grand setting of palaces and locations in Rajasthan are beautifully captured and make for a superb backdrop, adding grandeur  to the film. Full marks there.

The romantic portions between Sethupathi and Taapsee are well thought out and enacted, managing to generate a spark between them. Taapsee handles her portions well and suits the part in both time frames. Vijay Sethupathi makes an entry only in the second half, which maybe a disappointment for fans  but as usual shines in an effortless performance. The sword fight scene is to watch out for.  The romantic scenes are well written, and are a refreshing change from the usual. Even the way they meet is unusual. The undercurrents of humor and romance are well brought out by the lead pair. 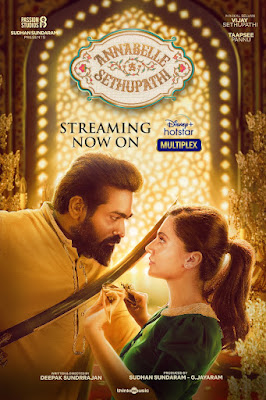 Yogi Babu holds the fort together in both the comedy and emotional bits. The large star cast of ghouls in their rich period costumes, add an element of drama.

On the flip side, the large, talented cast could have been better used to generate laughs. Referencès to Yogi Babu as Panni moonji vaya yet again, are tiresome, repetitive and in bad taste. The ending is left open with many questions unanswered and the promise of a sequel, leaving one a tad disappointed at having to wait. Though a horror film, there are no real scares for fans of that genre.

Overall, a film on a large canvas, beautiful visuals and excellent cast,  aimed at kids and family viewing.