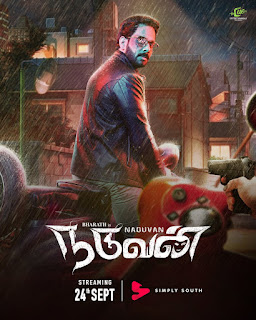 The suspesnse thriller revolves around Karthik ( Bharat) a tea estate owner in Kodaikanal, whose wife ( Aparna Vinod) cheats on him with his partner Shiva ( Gokul Anand).  In this world enters a trusted young employee Guru ( Aruvi Bala) of Karthik, who accidentally uncovers the secret affair and  gets caught up in the proceedings, involving blackmail, an accidental murder and the wrong kind of friends who land him further  in trouble.

What happens when all their worlds collide? Does Karthik get vengeance for being cheated on?  Who can he trust?

Dharan's music, keeping it light and non- intrusive adds to the suspense. The film is a mix of sentiment and suspense, making for an easy watch.

Bharat and all the actors are well cast. The camerawork by Yuvraj highlights the verdant appeal of Kodaikanal, and the locations are all well used to bring out the thrilling elements.

The film picks up pace in the home invasion and  climax scenes.

The film has good production values with crisp dialogues.

On the flip side, the parts showing the couple's family life and work become a tad repetitive to watch. The film tends to lag in these initial portions as it does in the investigation scenes which seem stretched. The relationships between the leads arent fleshed out enough for the viewer to feel involved in the happenings in the characters' lives.