The web series,  based on the book Birds of Prey, is centred around the murky world human traficking.

The investigative thriller has Sarathkumar playing a consultant investigating the case of a missing politician.

The case brings to mind his own disturbing past, which he has to deal with,  in order to come to a closure with past hurt and loss and needless to say he aces his role to perfection, bringing a gravitas and credibility to his character. 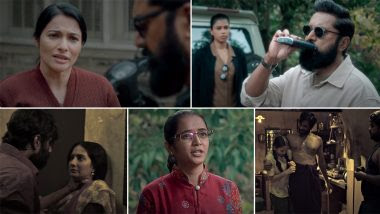 The fast paced screenplay, full of twists, moves between the past and present in a fairly engaging manner, keeping up the  suspense.

The period portions of the 80's and 90's are well presented in terms of costumes, sets and acting

The large, talented ensemble cast members ensure high engagement with the proceedings with their performances.

Certain torture scenes may not be for the faint hearted though. Certain scenes are raw and stark, centreing around the theme of the story.

The hill station of Kodai is beautifully captured, each location adding to the mystery and memories surrounding events in the characters' lives.