Google Kutappa (a remake of a Malayalam film), is directed by Sabari and Saravanan, starring KS Ravikumar, Tharshan, Losliya and Yogi Babu.

The story is about a sour tempered, old, village widower Subramani ( KS Ravikumar) who is clingy about his son Adithya ( Tharshan) and irked greatly when the latter,  a robotic engineer, flies off to Germany on work. However, he brings back a robot as a caretaker for the old man,  which leads to an unexpected situation. Subramani who hated the idea of modern technology, now slowly develops an affectionate bond for the robot. What happens when its time to take back the robot, who is just a machine? How does his father react? 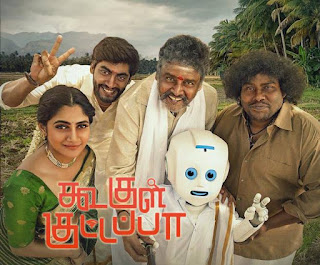 KS Ravikumar is superb as the ill tempered old man who later develops a fondness  for the robot. He brings to life  the character with his accent, body language and expressions.

Yogi Babu is his usual  comic self while Tharshan and Losliya play  their parts well as the youngsters caught up between the old guard and a new life. The way the robot has been shown, with its voice and gestures, is also a big draw. 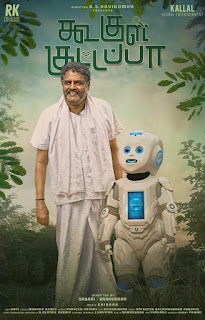 The scenes between the robot and Ravikumar are interesting and  touch an emotional chord. The way their relationship slowly develops is, brought out with such a delightfully detailed manner, that the viewer is drawn right in,  and begins to actually feel the emotions of Subramani, who has begun to treat the machine like a son, replacing the one who is never there for him.

However, few characters like Tharshan's boss are shown as uni- dimensional. Tharshan's film debut is a good one,  and he fits the part of the disgruntled son who wants to break free, but certain scenes bring out the need for him to work more on honing his skills. The screen chemistry between him and Losliya is well brought out.

The film explores topics like old age and accompanying loneliness of the elderly which is usually rarely highlighted. The way the village folk are a support for each other and the quiet pace of rural life is well brought out.

The ending seems hurried as compared to the rest of the proceedings which take place in a leisurely manner.

Overall, a good family entertainer, an endearing film which explores the intricacies of  human relationships.