Directed by Padmakumar, Visithiran, releasing on May 6th in theatres, is the Tamil remake of the Malayalam film Joseph.

Maayan ( RK Suresh in a stellar act), with  has taken voluntary retirement from the police force. He has become an alcoholic and chain smoker,  plagued by a failed love ( Madhu Shalini) and a broken marriage with Stella (Poorna ,who shines in the role). Both his daughter and Stella become victims of road accidents which causes Maayan to start probing deeper.

What he discovers is a Medical scam involvong organs, of gigantic proportions. Can a single individual like him take on the mighty scamsters? If so, how? 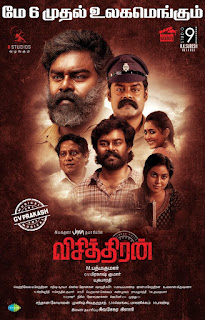 For R K Suresh, it's a meaty role playing a man in different stages of his life and he does an exemplary job of it. His intense and measured performance is a highlight of the film and carries it through despite the slow pace in several parts. The actor has transformed himself physically to fit the various phases of life of Maayan, and aces the body language well. 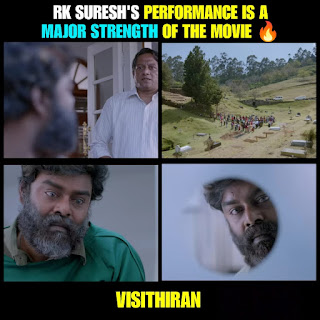 Poorna looks beautiful and plays different stages as bride, mom and later an older women with a quiet dignity and grace as befitting her role,  her eyes doing most of the talking.

Bagvathy Perumal, Madhu Shalini and others have done their parts well.

The bgm and music by GV Prakash conveys both thrilling and soulful moments well and the camerawork superbly showcases the beauty of the hilly areas the film is set in.

On the flip side, a lot of time is spent on repetitive shots of cigarette smoking, and slow movements of characters. The crucial climax explanations seemed a tad rushed as a result.

Overall, Visithiran, a thriller showcasing an important medical scam, with  good casting and performances, makes for a good  watch.