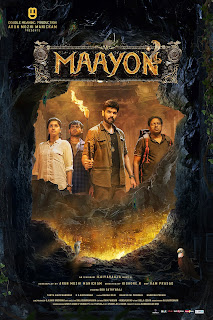 Sibi plays Arjun, an archeologist who is actually an idol smuggler working for a kingpin played by Hareesh Peradi. They target a centuries old temple for its invaluable treasures. But there is a problem. According to a prevailing legend, there is a hidden danger. If anyone enters the premises after 6pm, they are likely to lose their wits forever due to the power of hidden forces. Local cops too get hot on the gang's  trail while a village supremo  is bent on protecting the age old temple. In such a scenario, does the gang manage to get hold of their nefarious objectives?

The thriller  brings to life a series of mythological elements via vfx, like giant snakes and the like to add to the chills and thills. A scene with a bee shaped drone adds to the novelty factor. The gang has to deal with a centuries old maze apart from devilish, mysterious figures which add to the mystery factor.

Sibi  and Tanya pull off their role convincingly enough. The senior actors bring in their histronic abilities. There are grey shades in some characters which keep the story engaging, as does the treasure hunt itself. The mix of myth and science is engrossingly dealt with.

Ilayaraja's music adds his support to the film as does Arun Mozhi Manickam's screenplay and Ram Prasad's camerawork.

The Vfx scenes could have been worked upon more, to add greater conviction to the proceedings. The story picks up later after a few lags.

Maayon makes for a taste of mythology, legends and mystery mixed with science and is a different effort from the usual fare.