There are lot of difficulties in making a novel into a film. Mani sir has beautifully completed the film -Karthi On PS1 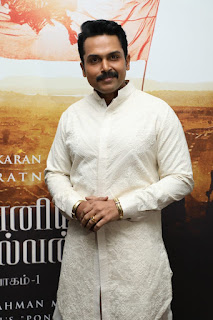 During our school,we usually sleep when it comes to history. We wont have much interest in history. We have been only taught about the Colonization of our land by foreigners. At this point of time,there is no time for anyone to read a book. But Mani sir has a made a film from a Five part book. Without reading history, we cannot create history. I suggest the younger generation to read history.

When we watch this film,we will feel proud, I will say Ponniyin Selvan is a gift to us given by Mani sir.

Also,there is difficulty in making a novel into a film,because each person will have a different perspective about the novel.Minimum 50 lakhs people would have read the book.But Mani sir have made the film in a way that it will connect with each and everyone.

During the film 'Roja' itself Director Mani sir has created Pan-India film.This film will make all the tamil people proud.Raja Raja Chozhan took tamil and its pride all around the world.Now Mani sir is taking it all over the world through this film.

To stand in this stage is making me to get goosebumps.As Karthi said,still we are talking about Cholas.Cholas travelled across sea and extended their kingdom.It is a proud to act in ManiRatnam film.And it is more proud to act in Ponniyin Selvan.I am very proud that i played the role Pazhuvettaraiyar.

There is a huge reception from the people,when the announcement about the film was made.Fans have been waiting to know when the film will release.Now i believe they have got the answer.

Chola Kingdom is huge.Kalingam,Gangai Konda Cholapuram is a huge kingdom.During that time,by following turtles,the Cholas went and expanded their kingdom.

Each Cast members would be fan of other characters playing in the film. I went to the shoot thinking that way only.But everyone in the set was living as their characters itself.Say this film as a Pan India film,Multi Starrer film.But this a Mani Sir film where this much artist have acted.I was afraid of seeing Mani sir.But Mani sir is a lion.We just have to act by absorbing the character as he says.

During my childhood,my grandfather told me to take and come ponniyin selvan book.I took and gave the book to him.He told still there is four more volumes bring that as well.I came to know about Ponniyin Selvan in that way only.Now when Mani sir called me for the role,i was very happy.

I have been forever indebted to Mani sir,All the character's have came out so naturally.I feel proud to be a part of this film.there is nothing more to talk than this as i was out of words right now. 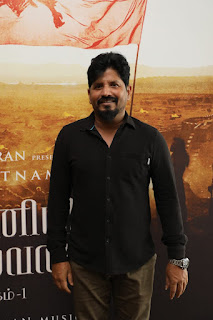 Its a proud for each and everyone.There is nothing more happy than presenting this film to you.I missed a chance once to act in Mani sir film.when he called me i thought he is going to scold me for that.But he told ,you are going to act as Ponniyin Selvan.I got Goosebumps when he told that.Our dream has became reality now.Lakhs of people have read this book. Thousands of people have talked about this book.But Mani sir has made this film Single Handedly.I bow infront of him.

When i was in college,i started to read this book.Its been over 40 years.Still it remains in my heart. First thanks to Kalki.Makkal Thilagam M.G.R should have acted in this film.After Nadodi Mannan,he was about to act in this film.I got the reason today why he was not able to act.He has left the film for us.Lot of people have tried.I myself tried 3 times from 1980's and today i was able to complete.It was possible only due to all the one present here.without them it would have been not possible.I thank especially A.R.Rahman.

ManiRatnam sir is my boss for 30 years.I learned from Maniratnam sir how to bring out the talent from a person.To make the music for this film,we did research in many places.during that time Covid Lockdown happened.Even during that time,everyone worked by having their lives in danger.So i would say this is everyone's film. 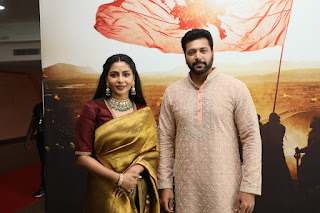 Its a treasure for me to work in this film.We can say lot about Mani sir.He is a best friend, teacher,guide.After getting the opportunity i came home.then i started to fear how we are going to make this film.Will i be alive until that? I had lot of fears inside me.Mani sir gave me confidence by breaking all those fears.This film is a symbol of Tamils.Until Tamil lives, Ponniyin Selvan will remain as a symbol.

Today you just witnessed only few Artists.As days pass by you will see all the actors acted in the film.Today only the teaser got released,still there is trailer and Audio launch and more event until the film releases in September 30th.