Rudra ( Arun Vijay),  a trigger happy cop, loses his young wife ( Iswarya Menon) who is a dire movie buff, after a kidnapping. He is much affected by her demise.

One day he is confronted by  a piece of evidence that links the dreaded piracy site Tamil Rockerz to her disappearance. He is also assigned the case of finding out who is the real face of the site.  A man who has no love for films is now on a mission to find the elusive owner. Vani Bhojan is his colleague from the cyber crime forensics department. The task is huge and time is running out, as a major star's film is due for release and under threat by the pirates. Do they get what they are looking for? 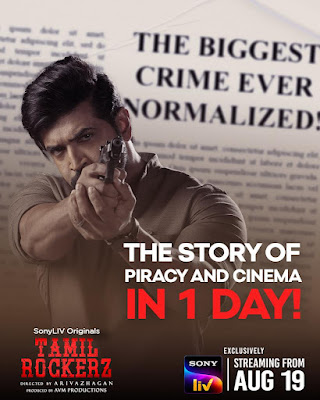 A fast- paced series, with a raw, gritty edge to it makes for a gripping watch.  There are ample twists and plenty of suspense, along with sentiments and subtle emotions, to keep one engaged and connected to the characters. Arivazhagan portrays well, the goings on behind- the -scenes and the issues faced by the film industry because of piracy.

Arun Vijay as the brooding, tough cop lives the c role and his entire body language and crisp dialogues mean business. Iswarya as the alluring wife and Vani Bhojan as the tenacious cyber crime sleuth add value with their performances.

Tharun Kumar ( of Thaen film fame)  as the villain Daya, and his support group are all well cast, as are Azhagan Perumal, MS Bhaskar and Vinodini. The focus is both, on the leg work by cops and the cyber forensics tech efforts, that go into solving such crimes.

The lip synch however, needed working on.

Overall, a gripping peek into the travails of the film world and  the effects of piracy and the challenges cops face when dealing with tech crimes.