Real time buddies Vishal and Arya will be teaming up on the silver screen in Irumugam director Anand Shankar's next film. The duo last worked together in Bala's Avan Ivan, nearly 9 years ago.

Mini Studios have announced their venture with the duo, "Vishal and Arya are co-starring in our film, which will release in multiple languages. This  will be our production company's 9th film and our4th in Tamil. " 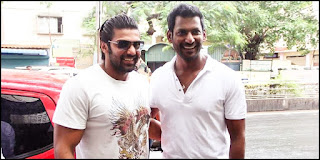 The film will have cinematographer RD Rajasekar  handling the camera.

The buzz is that Arya will be playing the villain. Mirnalini Ravi is touted to be part of the cast.

The shoot of the film has started on 16th October with a Pooja at Ramoji Film City in Hyderabad.

Details about other technical crew and artists will be out soon.