- October 20, 2017
The much awaited Shankar's magnum opus, the Superstar Rajinikanth's 2.0 is soon to have a grand international audio launch  at the Burj Park in Dubai on 27th October. Bollywood hero Akshay Kumar plays the main villain while B Town actor Sudhanshu Pandey who debuted in Kollywood with Billa 2, plays another bad guy. Today, Sudhanshu, the tall and handsome baddie, is in Chennai yet again, to complete a patchwork portion of the film, "I have some shooting left, as part of the patchwork. So I will be in Chennai for a day or two."

Looks like his links with Kollywood have ony gotten deeper, as he was in town just a few days ago, for the audio launch of the Gautham Karthik starrer Indrajith. Sudhanshu has a meaty role in the Kalaa Prabu directed film produced by Kalaipuli S Thanu, which is touted to be an Indian Jones type action -adventure. Speaking about Chennai where he has shot extensively for Lyca Production's 2.0 and Indrajith, Sudhanshu agrees, "Chennai feels like home. Passionate about films and with  humility in abundance, the city is just my kind of place!" 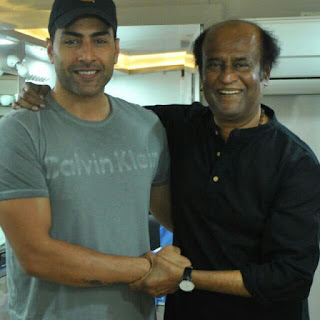 The actor is thrilled to be part of a Rajinikanth film. Whats more, Rajini even gifted him a book after a long spiritual discussion during a schedule of the film, an experience Sudhanshu cherishes immensely. Says he, "Rajini sir is beyond stardom. He has achieved way more than just succes. He is the best human I have met."
..................................