Producer P.K. Ram Mohan of Kalpataru Pictures is pretty exhilarated with the way his upcoming film tentatively titled “Production No.3” is shaping up. The film featuring Sasikumar in the lead role is helmed by NV Nirmal Kumar, whose maiden direction ‘Salim’ had him made him a bankable filmmaker.  Touted to be an action-adventure entertainer,  the next schedule is kick-starting in Mumbai, with now  Sarath Kumar joining the team.

Producer P.K. Ram Mohan says, “Everything we planned is proceeding at a brisk and steady pace. If not for the perfect planning and execution of Nirmal Kumar, this would have not been possible. To handle a project with prominent actors and that too completing the schedules on time without any delay is bliss for any producer. In this aspect, I am feeling so  satisfied with the way how our film is shaping up. We are now delighted to have the versatile actor Sarathkumar sir onboard. What keeps us excited is not just for having him as a part of this film, but the new makeover and style that he will exhibit here. We are commencing our second schedule of 25 days from June 6, which will be completely shot in Mumbai. This is really a special phase of shooting as it will have some crucial scenes shot across the exotic locales of this cosmopolitan city.”

When asked about the role that Sarath Kumar essays in the film, he jocularly adds, “Usually, it would be a producer’s strict rule to keep everyone in the team restrained from letting the cat out of bag and I shouldn’t be breaking the rules ! All that I can assure is that it would be totally a new experience for the audience to watch him in this film. Especially, the unusual combination of Sarath Kumar-Sasikumar will be a highlighted element."

Ganesh Chandra (DoP), Anand Mani (Art) and Sakthi Saravanan (Choreography) are among the technical crew. The official announcement of the film’s heroine and music director will be made shortly. 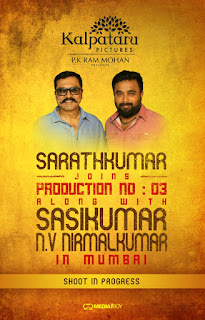