Reel, a film based on true events

- July 10, 2019
By Rinku Gupta
Sree Muruka Movie Makers Reel had a grand audio launch today. The film directed by R Munuswamy is touted to have a message for society and has the tagline, ' Reel of Real Love.' 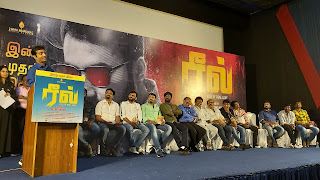 The DOP is Sunil Prem while the editing is by P Sai Suresh. Santosh Chandran who is basically a guitarist and has worked in Malyalam and Marathi films, has debuted as composer for the music for the film written by TN Suraj. The action is by Dilli Babu while the dances are by Noble. ' The hero told me he was not adept at dancing but on sets he did everything I choreographed to perfection, ' said Noble. The film is said to be based on real events. 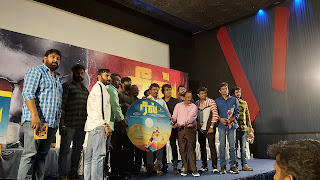 The producer, Captain Karudu, is an ex army captain who has also acted in a Malyalam film with Mammooty. He also acted in a Tamil film which didn't release. He is currently running a business in Coimbatore. ' I only wanted one thing and that was that the cast should be new.'
Stunt director Jaguar Thangam and actor RK Suresh were among the dignitaries at the event. 'Reel is based on the Pollachi incidents in recent times,' revealed Jaguar Thangam.
Said RK Suresh, ' One should know about about the workings of the industry in order to avoid losses and be successful.'
The hero is debutant Udharaj with heroine Avanthika.