Two cameramen in one frame !


They have a lot in common.. Both are cinematographers from TN who have made it big in Bollywood and Kollywood. When Jab We Met fame cameraman turned Sathuranga Vettai hero Natty Subramaniam heard that his good friend DOP Ravi Varman was in the building, he seized the opportunity to wish him. The occasion was the press screening of the Akshay Kumar starrer Mission Mangal  today,  where Ravi Varman was present. Natty was at the same venue to catch up with another team for his film work. 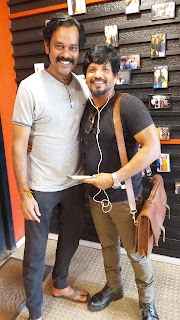 " When I came to know Ravi was here, I came to say Hi immediately," said Natty.
" We both go back a long way and started out at around the same time, " said the normally reticent Mission Mangal cameraman Ravi Varman, cherishing the moment.
"I will catch up in Mission Mangal soon," said Natty after a brief chat with his old friend.
It was good to see the camaraderie between the ace technicians!