The competition in the Tamil web series arena just got hotter with the entrance of one more player in the market.
Sony Liv,  the digital platform of  Sony Entertainment Television, has now entered the fray introducing original Tamil content to its entertainment portfolio.

And looks like Sony Liv is going all out to secure classy, top-notch content, what with the web -series being produced by Applause Entertainment ( creators of Criminal Justice, Mind The Malhotras, The Office), a Content Studio from the Aditya Birla group. None other than Applause CEO,  Sameer Nair (ex Balaji Telefilms, NDTV Imagine, Star India and programming head behind Kaun Banega Crorepati ) accompanied the Sony team, to introduce the content. 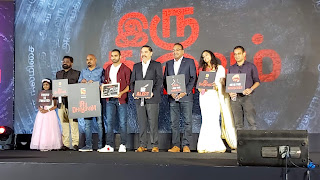 A press screening of Episode 1 revealed a taut thriller, with Nandaa playing a cop and Abhirami his estranged wife.
Said Uday Sodhi , " 4 G has brought in change in the way we consume entertainment, now increasingly on small devices and connected TV screens. We will be partnering with great content creators and try to maintain standards for the discerning viewers in TN." ( click here for full speech).

Sameer Nair said, " This is our first big Tamil content and we are excited about it. We have seen TV and film and now this is going to be the future." ( click here for full speech). 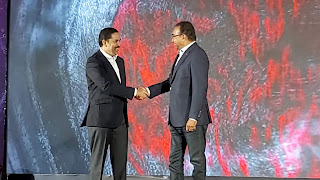 Speaking about the Tamil web series, Content Head Amogh Dusad said, " There is a robust line up of web series in Tamil with us. We are looking at a strong Tamil programming plan in the coming months. We are also planning to acquire Tamil films."

Both leads, Nandaa and Abhirami were excited to enter the OTT platform. " The investigative crime thriller content is very strong. The criminal uses a Thirukkural to leave clues," revealed Nandaa who is part of 2 other web-series as well.

It maybe recalled that rival Zee5 has  already been upping the ante with regular original Tamil  films (like  Igloo, Postman)  and web-series ( like Kallachiripu, America Mapillai, Whats Up Vellakari, Auto Shankar, Dhiruvam, Fingerprint) on thier platform in the last few months, apart from acquiring Tamil feature films like Sigai for direct digital release on their platform. Hotstar preceeded them with As Im Suffering From Kadhal in 2017 while Viu recently released Nila Nila Odi Vaa.
The discerning and tech savvy TN viewers are a huge regional market and a flourishing film industry replete with talented actors, writers and technicians makes content creation that much easier for the entrants.

Several actors from the big screen have happily made a cross over to this platform which gives them a freedom to explore roles that cinema rarely offers them due to perhaps image and viability constraints.   Prasanna for instance played a middle-aged, pot bellied scientist in Dhiruvam, while Gayathrie explored a negative character in Fingerprint. Ashwin kakumanu, Sunaina, Akshara Haasan and now Nandaa and Abhirami, are some of the others in the fray. Directors like Balaji Gopal and soon even Gautham Menon are into creating content. Production houses  like Karthik Subbaraj's Stonebench films ( with Kallachiruppu for Zee5)  too have stepped in, to explore the exciting possibilities the medium offers. Soundarya Rajinikanth is gearing up to co-produce the Tamil classic Ponniyin Selvan in a web- series format for MX Player.

The web  platform additionally offers a new lease of life to several assistant directors, upcoming actors and writers struggling to unleash thier latent talent but not finding enough work in a film industry already riddled with uncertain release dates and  finance issues.


By the look of things, its a win-win situation for all stakeholders and it  seems like its the viewers who are going to be spoilt for choice in  days to come.