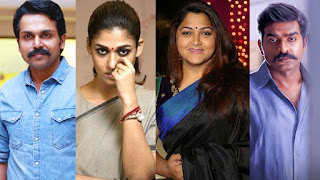 Yet these actors were not present at the event. A letter from Nadigar Sangam throws light on the reason...
List of  Tamil film winners👇 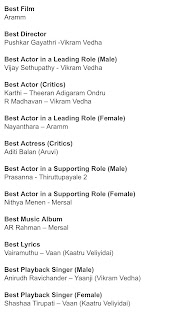 In the Past, there have been several Film related functions, Award ceremonies, Dance programmes and Television Programmes in which actors have participated and many have performed in such functions.
However, in recent times, such functions have taken a commercial twist and conducted as a means to generate huge revenue for such organising entities.

This practice and decision has been communicated clearly to Film Fare Award organisers in view of the function to be held in Hyderabad on 16th June 2018.

Since the organizers of the event did not cooperate and come forth with any positive response, the same was communicated to our members.

We duly thank and acknowledge Ms Nayantara , Mrs Khushboo Sundar, Mr Vijay Sethupathi and Mr Si Karthi and others who complied with the resolution of Nadigar Sangam and did not attend the function.

We further request all actors to abide by the Resolution passed in Nadigar Sangam special meeting with respect to participation in such functions and your cooperation will go a long way in backing the cause of supporting deserving members of Nadigar Sangam who need our aid.