- October 04, 2019
By Rinku Gupta
Siddharth's next in Tamil after Sivappu Manjal Pachai ( SMP), is Trident Arts' Aruvam. Catherine Tresa is his co-star along with Sathish and baddie Kabir Duhan Singh.
Catherine plays a girl who cannot hear.  According to Siddharth, the main reason he was drawn to the film was the theme." The film is about the adulteration we have in food these days. One doesn't know what one is actually consuming, " he said. 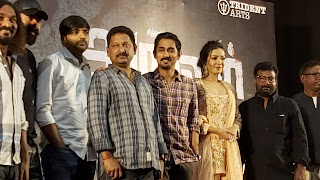 After playing a traffic cop in SMP , yhe actor plays a food safety officer in Aruvam. " But the film is a complete commercial entertainer and there are 5 major fight sequences with Kabir Singh. My character is prone to anger and I could relate to him because that is the one  thing we can do freely today. " 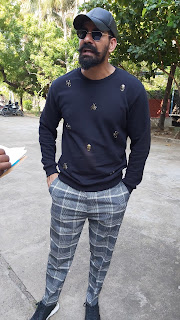 The film is a commercial horror film with Madhusudan, Naren, Manobala, Mayilsamy, Nandhakumar and Sujatha. Directed by Sai Sekhar the film has music  by S Thaman while Ekambharam cranks the camera.