OTT platforms are grabbing the opportunity of garnering Tamil content viewership and Disney Hotstar VIP is out to grab a piece of the pie as well.

The platform already has a line up of Tamil films on its platform.  But now its readying for its first direct OTT release, in the era of the covid pandemic. 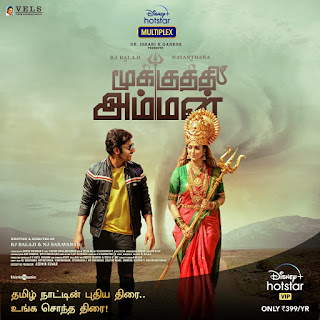 Nayanthara's Mookuthi Amman is all set to release on the platform.  The film also stars RJ Balaji who has also directed the film along with NJ Saravanan. The film is produced by Isari K Ganesh.

The movie is set to release on Disney Hotstar Multiplex with the aim to get Kollywood ' movies before theatre'.