Yesterday we had brought you news of Selvaraghavan confirming that he will be making Aayirathil Oruvan 2. And on New Year's day, the biggest announcement of the season has come from the maverick director about the hero of the film.  None other than his brother Dhanush will be reprising the lead in the sequel.

Very recently, Selva had announced teaming up with brother Dhanush for a film. Now he has tweeted, along with a poster, that he will be presenting Aayirathil Oruvan 2, a much awaited sequel wished by fans, with none other than Dhanush in the lead.

The pre-production stage will last for a year, given the scale of the project. The film is slated for a 2024 release. 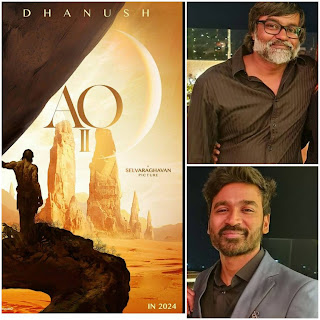 An excited Dhanush tweeted,  "A magnum opus !! The pre production alone will take us a year. But a dream film from the master @selvaraghavan ! The wait will be long. But we will give our best to make it all worth it. AO2 ..The Prince returns  in 2024"

Dhanush who has been shooting for Atrangi Re in Hindi, will be shooting for the Hollywood Netflix mega project The Gray Man in the meantime.

Further details of the cast are awaited. Exciting days ahead for fans of the director-actor duo and the original which has been re-released in theatres!