The blockbuster hit Kadaikutty Singam is being so well recieved by family audiences that many of the team  members got emotional at the event . The sense of unity and joy amongst the  entire, large cast and crew gathered exuded a feeling of a family reunion  to the event.

Rajasekar Pandian of 2D Entertainment gave the welcome address and thanked his childhood friend Suriya for bringing him into the team of the production house.
On the occasion, as a mark of his gratitude, TN theatrical rights distributor Saktivelan  gifted gold chains to Pandiraj, Karthi, Suriya and Rajasekar Pandian. 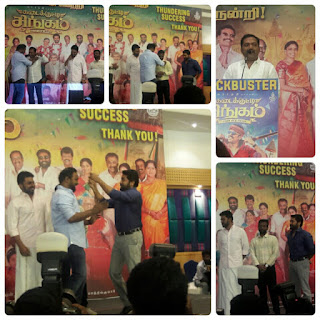 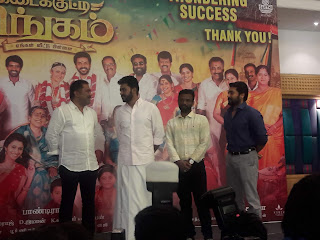 "Family audiences are returning to the theatres in large numbers and realising the value of family and relationships, thanks to our film," said comedian Soori, narrating a personal anecdote.  Sayyesshaa narrated how a lady had come up to her and said she would name her child after her character Kannukuiniyal, such was the impact of the film.

On the occasion, producer of the film, Suriya gifted a cheque of Rs 2 lakhs each to 5 farmers who were specially invited and honoured on  the occasion. Further he gifted a cheque of Rs 1 crore to the cause of agricultural research. " Agaram Foundation will be looking into the details of how the funds will be distributed and make an announcement very soon," said Suriya.  His noble gesture  elicited a thunderous response from the audience. 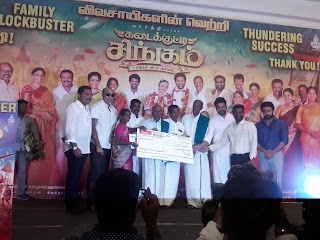 The large cast and crew of the film present , including Sathyaraj, Banupriya, Pandiraj, Karthi, Sayyeshaa, Priya Bhavani  Shankar, Soori, Arthana Binu, Ilavarasan, Sriman, Ponvannan, Mounika, Jeevita, Viji, editor Ruban  and music director D Imman and several others, all shared their experiences about the film. Imman said that even before the release Team 2D had gifted gold chains to the team, such was thier belief in the project and thier respect for the team's  work. 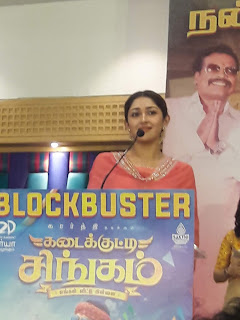 There were several emotional moments as well as shared camaraderie amongst the entire cast and crew present. Speaking on the occasion, hero Karthi said he was very happy that the smell of jasmine was in theatres due to women audiences and babies with feeding bottles were being seen with the large number of family audiences. He also threw light on the concept of STOP, "Sugar should be avoided for health reasons and also for the amount  of around 2000 litres  of water wasted to make a handful of sugar.Turmeric should  be a part of our daily diet due to its medicinal value. Oil that is consumed from edible products like coconut is good for health and pulses which are  produced locally in our state would help farmers instead of us consuming imported varieties." 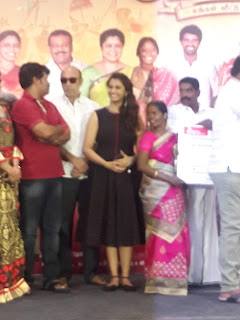 Each team member  was felicitated by a plaque and given Tulasi plants  by team 2 D Entertainment. 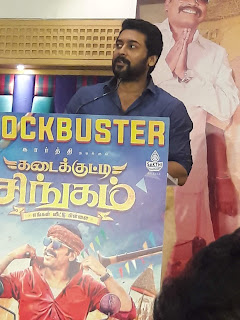 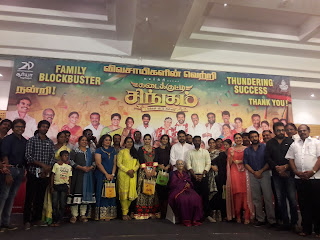 " All credit for the success of this film goes to director Pandiraj and the love and  trust of the entire team. We will continue to give value based films at 2D," said Suriya, thanking the public for thier outpouring of appreciation for the film.