Touted to be amongst the  biggest films of 2021,  three powerhouse film makers are coming together for Prabhas' next project.

The star revealed the first poster of his next project on social media,  creating a huge buzz.

Prabhas teams up with Vijay Kirangadur of HombaleFilms, the producers of the pan Indian blockbuster KGF 1 and 2, and the film's hit  director Prashant Neel.

The trio have come together for a multi-lingual release, titled Salaar. 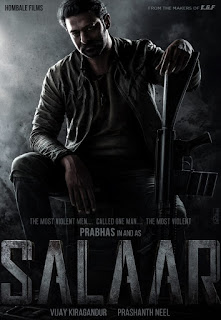 Prabhas is said to be unleashing his dark side for this huge action saga. He wrote on instagram, " Today I take a leap into the world of Salaar".

For the love of cinema, breaking the fence of languages, presenting to you an Indian Film.

The poster release today has created a huge buzz on social media and rightly so as both Prabhas' Baahubali and Neel's KGF took the Indian film industry by storm. In Baahubali, Prabhas had a strong producer who left no stone unturned to create a quality product and now with  the KGF team of Hombale Films, the backing is strong once again.  No wonder  then that the expectation metre is sky high!