The film is about an investigative journalist Mathimaaran ( Dhanush) who is determined to follow in the footsteps of his honest journalist dad (Ramky) who was killed by  enemies when Maaran was a child.  His mother too passes away during labour and Maaran then brings up his baby sister Shwetha ( Smruthi Venkat) showering her with parental affection. 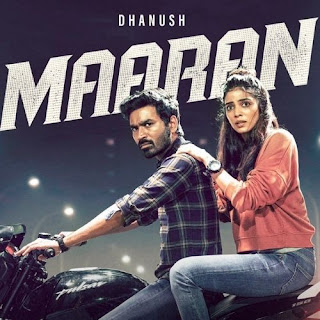 Cut to the present,  Maaran becomes an award winning journo exposing biggies, one of whom is a politico ( Samuthrakani). When Shwetha becomes a pawn in this battle with his vengeful enemies, Maaran must put all his investigative skills to test and discover the truth.

Dhanush gives his best to the role nailing every scene in his inimitable style but the spark of his usual self seems missing. He is ably supported by the talented Smruthi Venkat.  However, the  bro- sis sentiments seem to be more in focus than the investigative thriller angle.  Malavika Mohanan as his office colleague Tara, looks trendy and fits her role but her character could have been better utilised in the story. KK as the cop nails the moments he gets on screen but several scenes give an amateurish feel, given the way they are presented.

Despite a stellar cast, Maaran seems to falter in putting the seemingly disjointed moments together.  There is neither much of a story, nor are  there any real ' investigative' skills on show.  Much was expected from Karthik after his debut Dhruvangal Pathinaru, but looks like he hasn't been able to put his best foot forward with Maaran. The twist in the story doesn't seem convincing enough.

With good production values and  a stellar cast a premise with  potential could have been better explored.