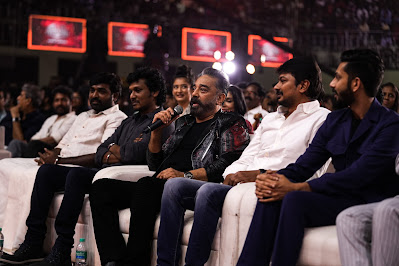 Considering the film’s release is nothing short of a festival for Kamal Haasan’s legion of fans, the event was attended by the stars of the Tamil film industry. Kamal Haasan, Udhayanidhi Stalin, Vijay Sethupathi, Silambarasan TR, Anirudh Ravichander, Raadhika Sarathkumar, Lissy and Sundeep Kishan, Santhana Bharathi were some of prominent names that graced the red carpet. The event was met with much fanfare as the first track Pathala Pathala is a chart buster already and the fans have been anticipating the trailer ever since the film was announced.

Kamal Haasan and Udhayanidhi Stalin , proudly present the movie 'Vikram' starring Kamal Haasan, Vijay Sethupathy and Fahad Faasil. Hailed as the biggest and the most anticipated film of the year, Vikram is directed by Lokesh Kanagaraj and the music is composed by Anirudh Ravichander. The film has been produced by Kamal Haasan and R.Mahendran and is slated to release worldwide on 3rd June.