Kaalangalil Aval Vasantham, a feel-good romantic entertainer, is produced by Aram Entertainment in association with Sree Studios and is directed by Raghav Mirdhath. As Tamil cinema is witnessing lots of romantic films, the team has attempted to narrate a love story in a different dimension. Newcomer Kaushik Ram is debuting in lead role through this movie. Anjali Nair of Taanakkaran fame is playing the female lead role. Heroshini is performing a pivotal character in this movie. Varghese Mathew, RJ Vignesh, Anitha Sampath, Swaminathan, Soundarya, Jaya Swaminathan and few others are a part of this star-cast. The audio launch of this movie was held this morning in Chennai that was attended by the cast and crew along with eminent personalities from the industry.

Here are some excerpts from the event. 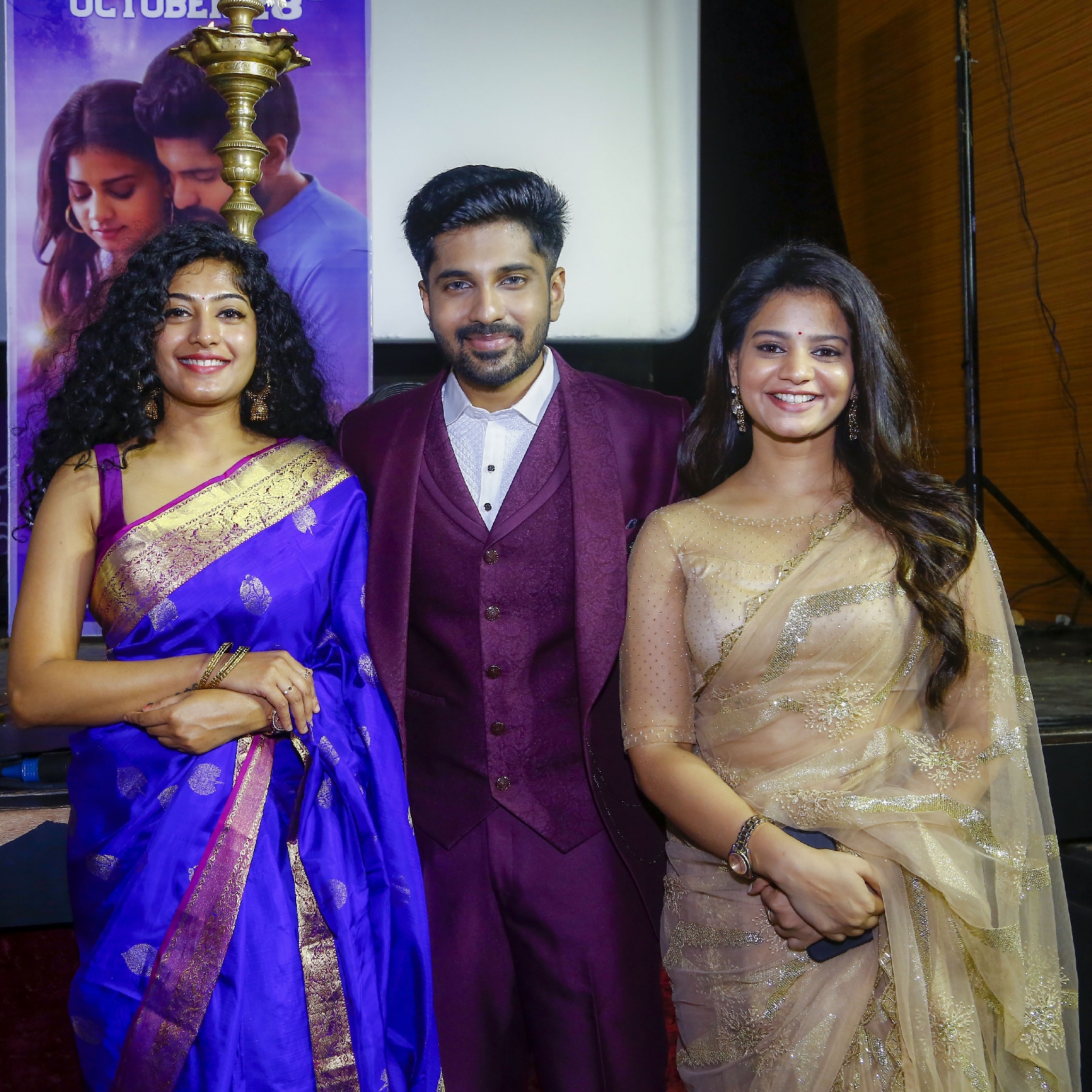 Producer CV Kumar said, “I have known the film’s director for 10 years. He narrated this script to me during the production of Attakathi. It’s a beautiful love story tailor-made for the contemporary youngsters. Everyone has done a remarkable performance in this movie. I wish everyone for the grand success of this movie.”

Director Ravikumar said, “The selection of script process by CV Kumar sir is always surprising and exciting. It’s great to see him encouraging the newcomers. The crew has created a beautiful movie. It’s evident that the technical crew has done a wonderful job in this film. I wish everyone for the success of this movie.” 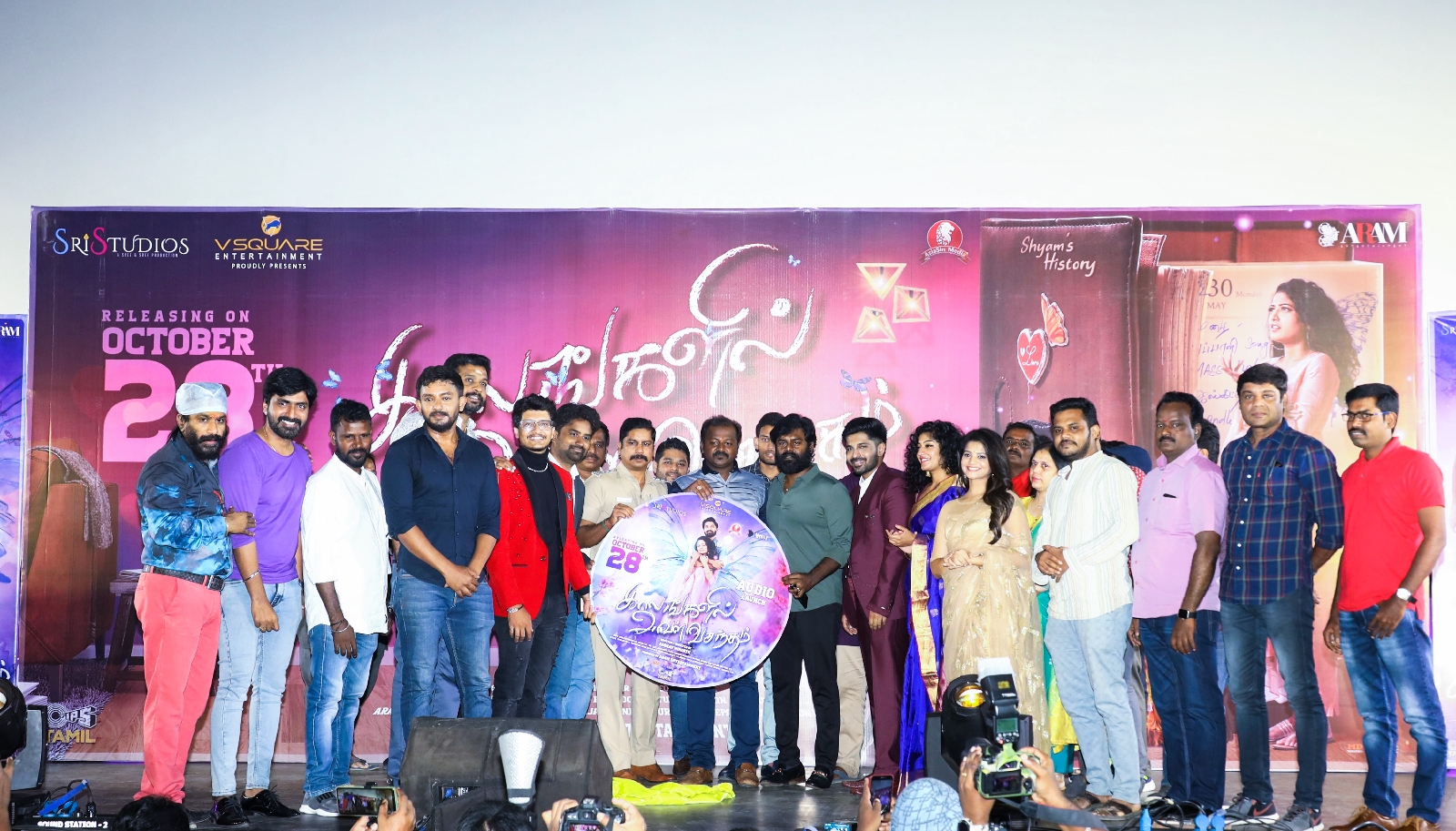 Director Ramkumar said, “If CV Kumar is involved in a movie, it will 100% have a unique story and premise. The whole film looks beautiful, and I believe everyone will like this movie. Wishing success to the entire team. Thank You.”

Actor RK Suresh said, “The presence of CV Kumar itself assures a substantial story in this movie. The title Kaalangalil Aval Vasantham itself is interesting as well as intriguing. It’s great to see that Tamil cinema is really doing a great job. It’s nice to see Vishwa, who is like my brother, being a part of this project. The hero of this film looks handsome. I wish the entire team for the great success of this movie.”

Director Gaurav said, “When CV Kumar decides to get into a project, he would go through deep and vivid analysis. Both the hero and heroine in a love story should look beautiful and it’s great to see the lovely faces in this movie. The title itself is creating a positive vibe. I believe the film will give warm and delightful experience to everyone.”

Actress Anjali Nair said, “I thank the producers for choosing me to be a part of this movie. Radhe characterisation is very close to my heart. The musical score by Hari is wonderful. Both Kaushik and Heroshini were great support for me during the shoot. I am sure everyone will like this movie. I request you all to support this movie.”

Actress Heroshini said, “I thank my team first for this wonderful opportunity. The film has shaped up really beautiful. I desire that everyone in the team should travel with many projects together. We need your blessings, wishes and support for this. We will soon meet you on the big screens.”

Director Raghav Mirdath said, “I thank my parents and wife. If not for their support, I wouldn’t be here. Most of the sports begin with the word ‘Love All’, and I commenced this movie with the same mantra. Love is the base of this movie. Hari has delivered beautiful music for this movie, and the songs will definitely garner good response. The film centers around love after marriage. Understanding the depth of this story, Kaushik has delivered a promising performance. Anjali Nair and Heroshini will definitely win appreciations for their performances. The technical team has dedicated itself to the core for delivering best output. I thank the entire team for the support. I am confident that the movie will be liked by you all. Thank You.”

Actor Kaushik said, “I thank everyone for coming here for this occasion and wishing our team. I have carried a great fascination for entertainment industry right from my childhood. My family has been a great support towards my dream and passion. I take this opportunity to thank them. This movie is the 15-year dream of director, and we have gifted it to you all with hope and belief that you will make it come true alive with success on the screens. I request you all to support this movie.”

Gopi Jagadeeswaran is handling cinematography for ‘Kaalangalil Aval Vasantham’, and debutant Hari is composing music, while Leo John Paul is the editor. Bankrolled by Aram Entertainment in association with Sree Studios, the film is getting released by V Square Entertainment all over Tamil Nadu.