LKG is a film with a message

- February 16, 2019
by Rinku Gupta
Rj Balaji, the RJ turned actor is now ready with his first film as a hero. Titled LKG the film is a political satire  releasing on Feb 22nd.
Speaking at the media meet, producer Isari K Ganesh of Vels Film International said, " This film is our first release under my banner though 5 films are under production. Both my father Isari Velan and I come from a political background.  So I am very happy our first film is a political satire." 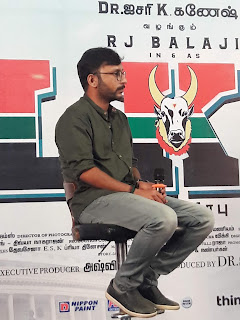 Leon James is the music director. " He gave us 5 options for every tune" revealed Balaji who also compered his own film event. The film's story, screenplay and dialogues are by Balaji while Prabhu has directed it. Priya Anand is the female lead.   JK Ritheesh has played a villain in the film. He praised Balaji for his discipline and punctuality in completing the film on time along with  his talent. Nanjil Sampath has played Balaji's father. " We rewrote his role from a villain to his real.life persona. We were completely flooredby his simplicity. I hope he does more films in the next few years. 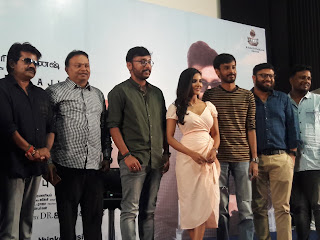 Sakthi Film Factory is releasing the film. " The film is not just a political spoof. Balaji has studied the situation in depth and made this film. The film will stand the test of time and will be a landmark film. If Isari Ganesh announces the sequel LKG 2 today, I will give the advance happily."
About his heroine Balaji said," I wanted to have a heroine who could  speak Tamil and emote after understanding the dialogues. Priya Anand was the ideal choice.I was hesitant about whom to approach since many heroines may not want to work with a comedian. But we were overjoyed when Priya heard our narration wanted to be a part of this film." 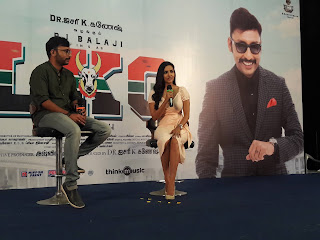 "Team work is the most active ingredient of this film This is a film with a good messgae," said director Prabhu.     Speaking about the film Balaji said," In 2017 I decided to stop acting though I got lots of offers. I felt dissatisfied with my roles. My friends thought it was wrong to reject work like this. But I wanted to do something different. I wanted to do a film with a social purpose."
LKG