Arun Vijay’s insatiable passion for sports and fitness  has been an inspiration for fans via his  regular workout posts on social media. The actor  is now shooting for his next film, Boxer for which he trained hard to  play a boxer. 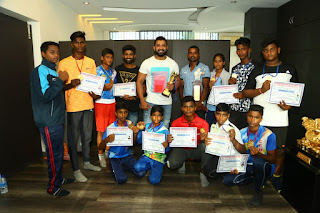 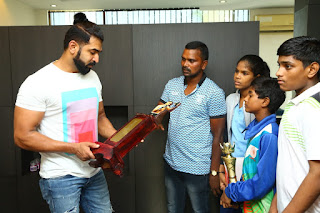 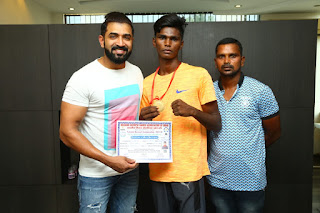 Taking time out from his scehedule, the Saaho actor, recently extended his token of appreciation towards 20 boxers from Tamil Nadu. He met those who have won medals (Men - 8 Gold, Women - 3 Gold and 9 others with silver) along with  Runner Championship Tamilnadu coach Senthil Nathan at the National Boxing Championship hosted by Mission Olympics Games Association of India.

Congratulating them he said,
“This isn’t an exultation of victory limited to these 20 superheroes, but for our entire Tamil Nadu. For me, they are the real Avengers. Being a sportsman or athlete isn’t an easy deal, especially a boxer. It involves lots and lots of mental and physical preparations. You’ve to be on Zen mode and must be capable of abruptly executing your action, the very next second with a calculative mind.  Personally, I have gone through certain training for my upcoming film ‘Boxer’, where I spent hours and hours for this role. But to see these champions sweat their soul day and night relentlessly, even at times of  leanest support is really astonishing. I wanted to meet them personally to motive and encourage them, but to be honest; I got deeply inspired and motivated as they shared their experience and journey. The challenges they encounter and how they combat them inspired me vividly, which I want to keep inhaling all throughout my life. Moreover, with their acquaintance filling my spirits with more inspirations and positivity, I want to maintain a perpetual friendship with them.”

Actor Arun Vijay has assured that he will keep extending his support towards them in their entire futur professional ventures.

On the professional front, Arun Vijay has now also lined up Agni Siragugal,  Saaho and Mafia that are at different stages of production.
Arun Vijay Boxer