The  Telugu movie ‘Evaru’,  actor Regina Cassandra has a promising lineup ahead in the Tamil industry among which is her mystery-thriller  directed by Caarthick Raju.
Vijay Sethupathi has unveiled the film’s first look and the title, ‘Soorpanagai’.

Director Caarthick Raju says, “We as a team are extremely happy about Vijay Sethupathi’s gesture of releasing the film’s first look and title." Going by the look and title seems like its
going to be a character driven film. 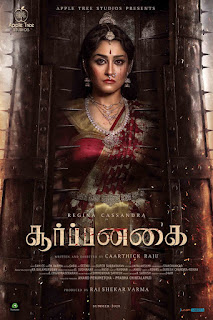 Ask him about  the phenomenal look of Regina, Caarthick Raju says, “That’s the ‘Mystery’ element, which I want the audiences to experience in theatres. Soorpanagai is a mystery-drama that encompasses action, adventure, humour and thriller moments together.”

Produced by Raj Shekar Varma for Apple Tree Studios, the film is simultaneously made in Tamil and Telugu. The shooting of this film commenced in January and is being filmed across the live locations including Courtallam.
Regina Cassandra soorpanagai