After Ram Gopal Verma announced there release of his latest film NNN aka Naked Nanga Nagnam on a blockchain, pay per view platform to amazing results, looks like others are now following suit. 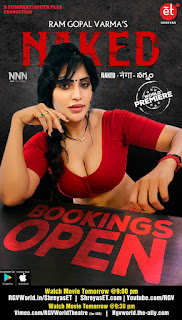 In the uncertainty of the opening of theatres post the lockdowns, more producers are turning to alternative platforms like OTT.

Now, the success of RGV's  Naked on
the-ally.com site has got producers looking to release their films on the platform as well.

New films like Devadoss,Kallan and  Monkey Donkey are to release on it.  Also, films like  Atharva's Semma Bodha Agathe, Kishore's Thilagar, Dhruva's Kadhal Kasakadaiya and Bose Venkat's Kanni Maadam,  are to have a re-release on this Theatre at  Home platform which streams directly to viewers.

Looks like the lockdown has opened up new avenues to explore in the film business. RGV is touted to be releasing his next film on Corona Virus on the same platform.  Has the maverick film maker set a trend?
nnn ram gopal varma Rgv