- July 30, 2022
Produced by Amala Paul under her home banner, who has also played the protagonist, the nail - biting thriller will Premiere exclusively on Disney + Hotstar,.

Anoop S. Panicker has directed this breathtaking fast paced thriller which has music by Ranjin Raj.
Abhilash Pillai is the dialogue writer. Aravind Singh is the cinematographer and San Lokesh is the editor. 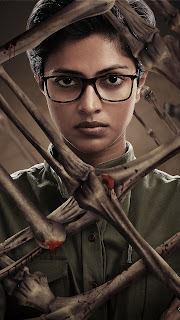 Cadaver is a gritty bone -splitting crime thriller in which a Police Surgeon, Bhadra (Amala Paul) is brought onboard by ACP Vishal as an investigation officer in a case of a coldblooded murder .The murders continue to take place and the mystery thickens as it deepens further!

As the case almost draws up to a close, Bhadra's relentless pursuit of the case leads to the unveiling of the mystery and the brainchild behind the murders!