Airaa - a horror film with Nayanthara in first dual role

Enthusiasms that never fade and passion for unexplored experiments that never settle has kept Nayanthara as the undisputed queen of South Indian industry. With her realms of fan base expanding into monstrous figures and her market values scaling towards incredulous peaks, Nayanthara doesn’t want to sprawl out and relax within comfort zones, but keeps pushing her to higher grades to unleash her potentials. 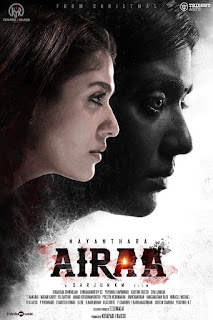 Evidently, AIRAA (Elephant), directed by Sarjun KM  is going to be an archetypical case of such prominence, where she will be seen playing dual roles for the first ever time in her career. Especially, to collaborate with the prestigious production house of KJR Studios, which had delivered an all seasonal classic film ‘Aramm’, the expectations have taken a swirl of upbeat.

“Yes, it’s a proud moment to be associated with Nayanthara madam once again after the critically acclaimed Aramm. Moreover, our responsibilities as a production studio were much heavier as we had to retain our stature and at the same time, offer something that would be a game-changer for Nayan madam. When Sarjun came up with the narration of ‘AIRAA’, a horror’ genre. it completely gave an impeccable confidence.  Furthermore, the surprisal element of Nayanthara appearing in dual roles enraptured our interests. As a producer, I had an instinctual belief that it is a film that will gratify the huge Nayanthara fans league and at the same time, felt Airaa will be the right platform to amplify her stature to next level. In addition, the preeminent works of Sarjun MK that involves his short films – Maa, Lakshmi and a peerless stroke with his directorial debut ‘Eccharikkai – Idhu Manidhargal Nadamadum Idam’ assured us of his commitment to deliver what he promises,” says producer Kotapadi J Rajesh of KJR Studios.