Icon of Golden Jubilee Year Award at IFFI2019 for Rajinikanth !

The Union Government is set to confer a prestigious award on Superstar Rajinikanth.
The Union Minister of Information and Broadcasting,  Shri Prakash Javadekar has made an announcement, "In recognition of his outstanding contribution
to Indian cinema, during the past several
decades, I am happy to announce that the
award for the ICON OF GOLDEN JUBILEE OF
#IFF12019 is being conferred on cine star Shri
S Rajnikant.
FFIGoa50 " 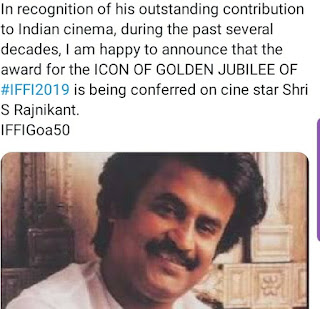 Rajinikanth expressed his thanks with a tweet, "I thank the government of India for this
prestigious honour bestowed upon me on the
golden jubilee of the International film
festival of India .
&#IFF12019 "

The International Film Festival of India  2019  marks  the 50th year of the festival , to be held fromNov 20 to 28th in Goa.
Close  to 250 films will new screened at the festival. A world- wide phenomenon, Rajinikanth is a legend,  with fans across countries and age groups. It is indeed a befitting honour for his legendary contribution to contemporary Indian cinema.