- May 04, 2019
by Rinku Gupta
The audio launch of Sri Vaari Film's Yogi Babu starrer Dharma Prabhu was a grand affair. 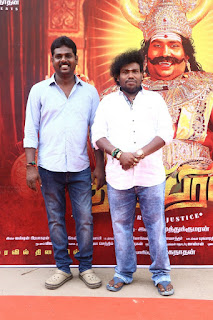 Speaking on the occasion,  lyricist Yugabharathi said, “It’s happy to see my friend becoming a producer and Yogi Babu has been working with lot of efforts to retain the position as top league  comedian. I have worked almost all the filmmakers in the industry, but it gives me more pleasure to work with my friend Muthukumar.”

Actress Rekha who plays his mother in the film, said, “When director Muthukumar approached me to play mother’s role of Yogi Babu, I gladly accepted it as I felt that there would be lots of enjoyable and fun-filled scenes. I am happy to see a good reception mounting over the teaser and trailer.”

Editor San Lokesh said, “It’s really been a great journey working in this film and if you’ve all enjoyed watching the trailer, we have avoided revealing a few things. Yes, I am sure there’s lot for the audience to experience with Dharma Prabhu.” 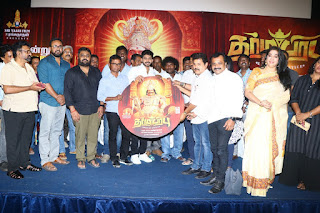 Director Sakthi Soundarajan said, “Producer Ranganathan was executive producer for my first film and it’s really elating to see him as producer with this movie. The grandeur that is seen in the film and the humor elements are definitely going to be a special attraction for the audiences.” 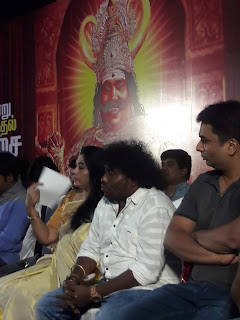 Choreographer Viji said, “Yogi Babu has been continuously working day and night. His hard work is the only reason behind his success today. Working in ‘Dharma Prabhu’ has been an unforgettable experience as everyone on the sets would be literally happy all the times. Art director has done a great job of erecting grand sets and he was so conscious that the old styled set works shouldn’t be repeated.”

Director Sasi said, “Usually, I don’t ask any director or assistant director about their upcoming plans and how their current projects are going on. But I was always so much concerned about Dharma Prabhu. To see the trailer having so much of fun and grandeur, I am sure, it is going to be a sure-footed winner in theatres.”

Music director Justin Prabhakaran said, “I am an ardent fan of Yogi Babu and to work for his film is a delight… My favourite song in the film the one that comes in retro style featuring the look alike of TMS, MSV and Vaali sir. MSV’s son has crooned the song.”

Director Muthu Kumaran said, “Yogi Babu and I have been close friends and have been roommates for a very long time. We discussed this script before many years and to see it getting materialized today is a blessing. The film is a fantasy subject based on Lord Yama and is narrated with fun filled moments. Actually, I narrated the story casually to Producer Ranganathan asking him to refer me new producers. However, he surprised me saying that he is ready to produce it by himself. Art Director has done a colossal job with his set works and the costume designing has been done greatly. My other film ‘Kanni Raasi’ featuring Vimal and Varalaxmi Sarathkumar in lead role was completed in 45 days and we managed to wrap up ‘Dharma Prabhu’ in 40 days. Yogi Babu’s good hearted nature is what has made him big today. There were times, when we would wait for him to bring 300 rupees remuneration from Vijay TV ‘Lollu Sabha’ shooting and we would cook food. Today to see him successful gives us joy.”

Producer K.E. Gnanavel Raja of Studio Green Films said, “From the day I have seen P Ranganathan sir, he has always been smiling. He is someone who keeps loving cinema and is passionate about it.” He jokingly continued to add, “ I am so happy to see Yogi Babu sharing the screen space with Rajinikanth sir. But I don’t know how he is going to react after seeing this trailer that has a funny take on him. I am sure Yogi Babu has to face the consequences during the next schedule of ‘Darbar’.”

Producer T Siva of Amma Creations said, “I am sure, many producers would have envied Dharma Prabhu after watching the first look. Such happens to be the fan base that Yogi Babu has acquired. Tamil cinema has always witnessed so many comedians ruling the show and now to see Yogi Babu has joined them is a big gift.”

Producer P Ranganathan rendered a speech of few words thanking each and everyone in the team and thanking the special invitees who attended the event.

The hero of the day, comdian Yogi Babu who is now acting in Superstar Rajinikanth's Darbar as well, said, “The film has two heroes, one is played by me and another by Sam, which involved the earth episodes. Myself and director Muthu Kumaran have been friends for 15 years and what all he told is true. We have stayed and journeyed together in many situations with and without food. Today we are happy that our dreams have come true. Since, both Muthu Kumaran and Sam Anton both happen to be my friends, I had accepted to  shoot for both Dharma Prabhu and Gurkha at the same time that I couldn’t sleep for 45 days. The role of Lord Yama is something exceptional as we get that attitude as soon as wearing the makeup. I could feel it throughout the shooting. I am sure this film will be one among the special movies in my career. So far, I haven’t demanded any big remuneration from my producers and have always adjusted for the sake of their well being. In fact even recently I reduced my salary to half to encourage a young newcomer director who was in dire straits and was relying on making it in cinema. I still recall the days In used to earn just Rs 2000."