Every character of Magamuni will leave an impact - Gnanavel Raja

- August 31, 2019
By Rinku Gupta
The Magamuni press meet was held in the presence of the cast and crew which included director Santhakumar, Arya, Indhuja, Mahima Nambiar, Thaman, Gnanavel Raja, VJ Sabu and others. The film is releasing on September 6th.
"Only a few films have impacted me. Mounaguru was one of them. From several years I have awaiting this opportunity to work with director Santhakumar. When I first met him and wanted to work with him after his debut film, his son was in 4th std. Now hes in 12th! Every character of Magamuni will leave an impact on the viewer. I say this as a viewer, not as producer, " said producer Gnanavel Raja. 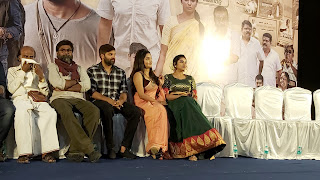 Actor Aruldass espressed his happiness that majorly Tamil film actors have been used in the film. " Even though his films take time, Santhakumar's films are always awaited eagerly by the industry and audiences. "

The film stunts are by Action Prakash of Naan Mahaan Alle fame and are touted to be realistic. There are only 3 songs and 2 of them is written by senior lyricist Muthulingam.
Music director Thaman said he enjoyed the process of composing for this film, his second with his close friend Arya. He said the film has prompted to give spiritual elements in the music. VJ Sabu said the film has several silences which speak a lot in the film.
BalaSingh has played an important role in the film, that of a politician. Rohini revealed they tried 2 looks for her in the film. " I saw the amazing work ethics of Santhakumar's team in that photo shoot was happy to be part of the project."
For hero Arya the film is what he termed as a blessing. " Im happy Shantakumar chose me for this project. The energy on sets was high and Indhuja and Mahima acted to well, it gave me impetus to compete and do my best."
The film releases on September 6th.