Lyca Productions, the producers of 2PointO, Shankar's magnum opus,went all out to make the film's trailer launch a grand event.

Right from the rows of Chitti statues greeting visitors, to the fanfare and music, the festive atmosphere was complete at the Sathyam cinemas.  Media from around the country was specially flown in for the event. 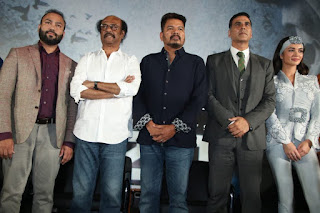 As the Superstar entered, the crowd frenzy reached a pitch. Lyca head Mr Subhaskaran along with  actor Akshay Kumar, AR Rahman, Amy Jackson, Editor Antony and Resul Pookutty were all present along with  other technicians . Akshay who plays the main protagonist, read out a few lines of his speech in Tamil. Amy Jackson expressed how thrilled she was to be a part of the film. A special AV was played where stars put forth questions  to the dignitaries present. Answering one of them, AR Rahman said that he was inspired by the many qualities of Superstar Rajinkanth, especially his energy and professionalism even at his age. 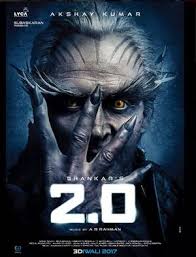 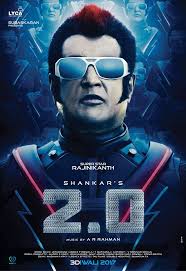 Superstar Rajinikanth declared that the film would be a super duper hit. Resul Pookutty and Shankar threw light on the new technology of SRL spund that they had introduced which would take the film to the next level of 4 D, with sound also emanating from below the feet of the audiences.
A song Indiralogathil Sundariye and the trailer in 3D were screened. The film with a budget of 600 crores is
is set for a November 29th release in 3 languages. 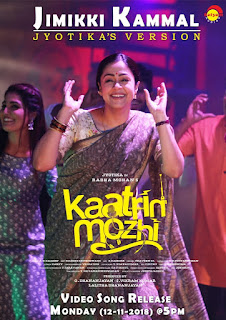