Kangana Ranaut launches Tamil trailer of her Manikarnika in Chennai

- January 04, 2019
by Rinku Gupta
Looking regal and resplendant in an elegantly draped silk sari,  Bollywwod actor Kangana Ranaut was in Chennai this evening to launch the Tamil trailer of Manikarnika.

The film is being released on January 25th in Hindi  and dubbed in Tamil and Telugu as well. Kangana has co-directed the film and acted in the lead role as the Rani Of Jhansi, the brave warrior queen Lakshmibai. 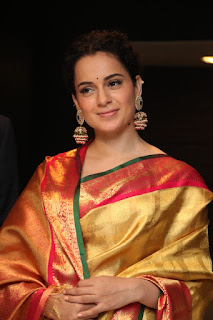 Speaking on the occasion Kangana acknowledged that it was a tough role to play, and she had to understand the character of one so perfect with high ideals. The action war sequences were tough to ace as she had to wield swords for fights and also ride on horseback for some sword fights. The physical rigeurs of her role were a tough proposition for her lean frame. 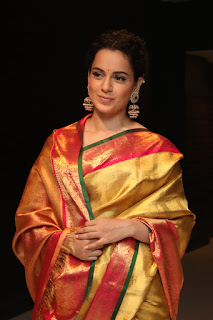 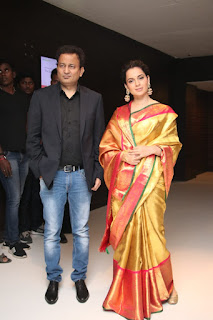 The actor felt she should have done such roles much earlier in her 12 year career as they were inspiring.

Accompanied by producer Kamal Jain, the actor answered questions from the emcee and the  media and seemed quite upbeat about the Tamil release  of the film.

Shankar Ehsaan Loy have composed the music for the film which also stars Danny Denzongpa, Ankita Lokhande and Kulbhushan Kharbahanda amongst others.

In the trailer Kangana inspires as the valiant warrior queen Rani Lakshmibai who has been passed down from centuries as a role model for young girls.  The film is being released by Zee Studios.