A rivetting saga of queen  Mary narrated in a way that brings out the person behind the historic figure we know her as. The film brings out  the trials and tribulations she faced  as both  a queen and a woman in  an Age when prejudices of patriarchy were the norm. 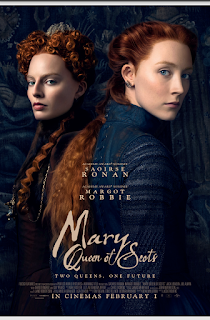 synopsis:
Mary, Queen of Scots explores the turbulent life of the charismatic Mary Stuart. Queen of France at 16 and widowed at 18, Mary defies pressure to remarry. Instead, she returns to her native Scotland to reclaim her rightful throne. But Scotland and England fall under the rule of the compelling Elizabeth I. Each young Queen beholds her “sister” in fear and fascination. Rivals in power and in love, and female regents in a masculine world, the two must decide how to play the game of marriage versus independence. Determined to rule as much more than a figurehead, Mary asserts her claim to the English throne, threatening Elizabeth’s sovereignty. Betrayal, rebellion, and conspiracies within each court imperil both thrones – and change the course of history.


The camerawork draws us into the landscape of Scotland and the surrounding imposing castle and coastline all serve in making us realise what the heavy odds were that she fought to valiantly to overcome.
A must watch for its performances and compelling story telling as well as its successful attempt  to humanise historical characters for us.  A treasure trove for history buffs.